Stars hold on to beat Panthers after Scott Wedegwood’s injury 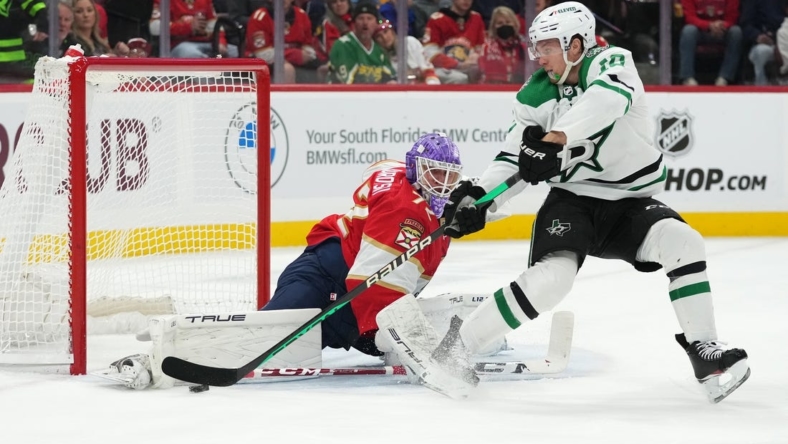 Roope Hintz scored twice as the Dallas Stars started hot and held on to defeat the host Florida Panthers, 6-4, on Thursday night in Sunrise, Fla.

Stars goalie Scott Wedgewood injured his back with 5:55 left in the second period, appearing to hurt himself while making two straight saves on point-blank shots by Anton Lundell. Wedgewood, who finished with 21 saves, was taken off the ice by stretcher.

Panthers goalie Sergei Bobrovsky was pulled after the first period with the Panthers trailing 4-0. After making seven saves on 11 shots, he was replaced by Spencer Knight.

The Stars got those first-period goals from Hintz, Nils Lundkvist, Jamie Benn and Tyler Seguin. Hintz scored again in the second period, and Ty Dellandrea got an empty-netter with 18 seconds left.

Florida was without star center Aleksander Barkov, who sat out due to a non-COVID illness.

Dallas scored on its first shot on goal. With 4:58 expired in the first, Seguin fed Hintz, who finished the 2-on-1 rush.

The Stars then scored twice in 37 seconds.

First, Lundqvist, a defenseman acquired from the New York Rangers in September, scored his first Dallas goal with a terrific individual effort, circling around several Panthers before beating Bobrovsky top shelf from a tough angle.

Then, after a battle along the boards, the puck came free. Panthers defenseman Aaron Ekblad challenged and got beaten badly as Dellandrea pushed the puck ahead to Benn, who skated in alone, opening up Bobrovsky and beating him five-hole.

Dallas made it 4-0 with nine seconds left in the first as ex-Panthers forward Mason Marchment picked off an ill-advised Reinhart cross-ice pass. Marchment then dished to Seguin, who was in alone for the score.

Florida finally got on the board with Verhaeghe’s power-play goal 7:29 into the second.

Dallas took a 5-1 lead less than four minutes later as Tkachuk turned it over, and Hintz beat Knight on a broken play.

The Panthers ended the second with two straight goals to close its deficit to 5-3. Luostarinen scored on the rush off a great pass from Bennett. Then, on a Panthers power play, Ekblad’s shot went in off Reinhart’s body.

Florida cut its deficit to 5-4 after another great Bennett pass, this one setting up Tkachuk for a tap-in goal with 6:03 remaining.