Stars hold on for 2-1 win over Sharks 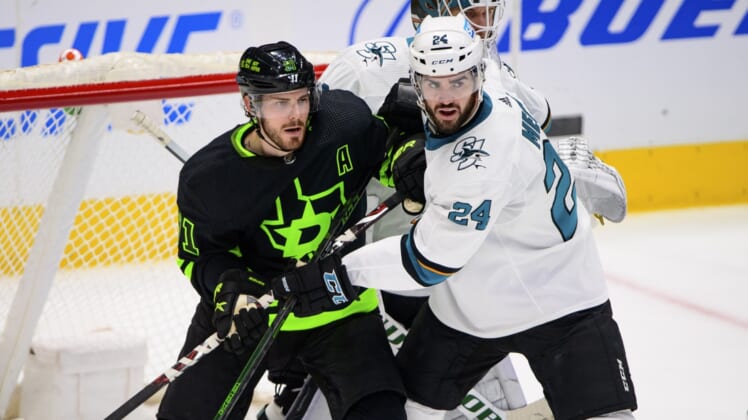 Michael Raffl snapped a 22-game scoring slump to earn the game-winning goal and the host Dallas Stars claimed a 2-1 victory over the struggling San Jose Sharks on Saturday to solidify their grasp of a wild-card playoff spot.

Tyler Seguin also tallied and goaltender Jake Oettinger made 23 saves for the Stars (43-27-5, 91), who hold the second wild-card spot with a four-point edge on the Vegas Golden Knights.

Oettinger did not face a lot of shots but did shut the door when the visitors forged a late power play and pushed to the buzzer for the equalizer.

The Stars are on a 10-3-2 run. They are tied in points with the Nashville Predators, who hold the first wild-card spot, but Nashville owns the first tiebreaker — regulation wins.

Looking for a win after dropping their last game in overtime, the Stars received an early boost when Seguin opened the scoring at 5:55. As Ryan Suter sent a shot to the net, Seguin swooped behind the coverage and redirected the puck into the cage for his 23rd of the season.

Raffl’s seventh goal of the campaign — and first since Feb. 27 — doubled the lead at 13:32 of the second period. Luke Glendening grabbed a loose puck in his zone and sped away on a two-on-one rush. Raffl converted the cross-ice pass for the short-handed tally.

The Sharks finally gained some life when Meier put them on the board with 36.9 seconds remaining in the second period. Meier was sent the puck in the high slot and he ripped a shot through the screen and into the net for his 33rd of the season.