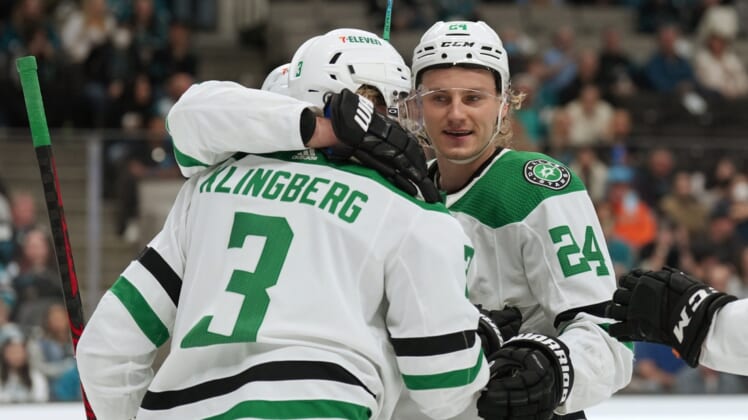 Vladislav Namestnikov had a goal and an assist, and Joe Pavelski scored what proved to be the game-winner to lead the visiting Dallas Stars to a 5-4 victory over the San Jose Sharks on Saturday night.

Jason Robertson and Roope Hintz each had a goal and an assist, and Tyler Seguin added three assists for Dallas (39-25-3, 81 points), which moved past idle Vegas into the final playoff spot in the Western Conference.

Jani Hakanpaa also scored a goal and Scott Wedgewood made 24 saves for the Stars, who won for the sixth time in their last seven games.

Kaapo Kahkonen, making his first home start for the Sharks since being obtained in a trade with the Minnesota Wild, stopped 10 of 14 shots before being pulled after one period. James Reimer finished up and made 14 saves.

San Jose jumped out to a 1-0 lead at the 1:25 mark of the first period when Bonino flipped in a rebound of a Gregor shot for his ninth goal of the season.

But Dallas tied it just 25 seconds later. Seguin intercepted a Tomas Hertl pass behind the net and passed the puck to Namestnikov in the slot where he fired a shot under Kahkonen’s glove for his 14th goal of the season.

Hakanpaa put the Stars ahead at the 8:11 mark when he one-timed a Sequin pass past a screen for his third goal of the season. Hintz made it 3-1 less than two minutes later with his 30th goal of the season, redirecting John Klingberg’s pass from the left circle.

Robertson extended the lead to 4-1 when he banked in a rebound of a Denis Gurianov shot from behind the net off the back of Kahkonen. The puck crossed the line with just .3 seconds left in the opening period.

San Jose cut it to 4-2 at the 7:53 mark in the second period when Burns’ crossing pass caromed in off the skate of defenseman Thomas Harley. It was the ninth goal of the season for Burns.

Pavelski made it 5-2 midway through the third period when he one-timed a Hintz pass from the slot for his 25th goal of the season.

San Jose closed to within a goal late on rebound goals by Leonard and Couture, the final one with 1:28 remaining.