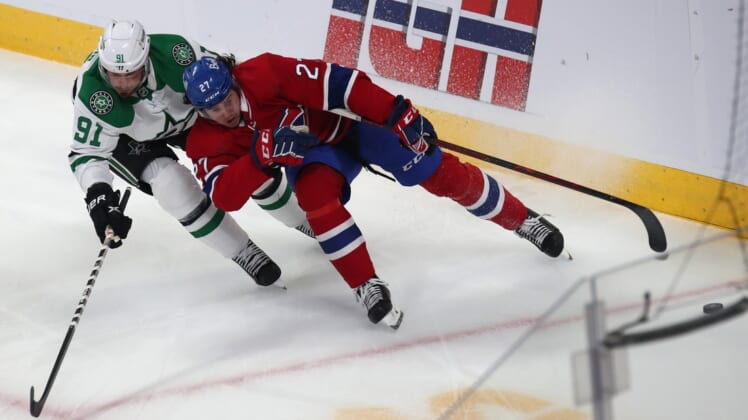 John Klingberg recorded two goals, including the game winner with 10 seconds remaining in overtime, as the Dallas Stars earned a 4-3 victory over the host Montreal Canadiens on Thursday.

Jamie Benn also had a three-point night, collecting a goal and two assists for Dallas. Radek Faksa scored the Stars’ other goal.

Nick Suzuki and Cole Caufield each had a goal and an assist for Montreal. Corey Schueneman also scored for the Habs, putting the Canadiens ahead in the third period on his first career NHL goal.

Dallas goaltender Jake Oettinger stopped 28 of 31 shots for his 20th win of the season.

Allen stopped 31 of 35 shots in his return to the ice. Allen had missed Montreal’s previous 25 games due to a lower-body injury.

Both goalies made multiple impressive saves during the first period, but Faksa snuck a shot past Allen with 1:27 left before the first intermission.

The Canadiens equalized on a power play at 9:36 of the second period. Suzuki made a tremendous cross-ice pass to find Caufield for the 21-year-old’s fourth goal in his last three games.

Benn restored the Stars’ lead at the 15:51 mark, as a shot off the end-boards deflected right to Benn at the side of the net.

Suzuki and Caufield joined forces again on Montreal’s next equalizer, with Caufield and Alexander Romanov setting up Suzuki’s 17th goal of the season midway through the third period.

Schueneman’s milestone goal put Montreal ahead four minutes later, but it was then the Stars’ turn to even the score. With 4:46 remaining in regulation, Klingberg beat Allen on a wrist shot from the slot.