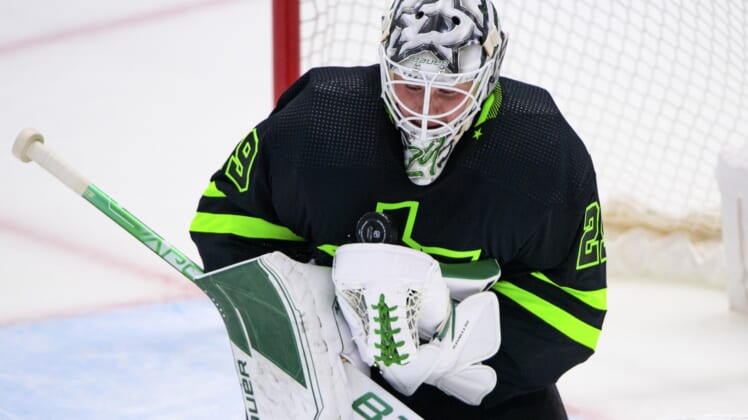 The Vancouver Canucks already needed a miracle finish to make the playoffs, and now their quest has become that much harder.

Vancouver’s playoff hopes are faint at best, being seven points out with seven games remaining, but losing a leader who is pacing the team with 31 goals is a huge blow.

“If we have a leadership problem at this time, then we’re in bigger trouble than we think,” coach Bruce Boudreau said.

Fortunately, it appears forward Brock Boeser will return after missing five games and likely will take Horvat’s spot on a line with Elias Pettersson and Conor Garland.

The Canucks have been a long shot to make the playoffs since starting the season with a 6-14-2 mark, but they haven’t stopped pushing and have a handful of players rolling.

The Stars, who hold one of the two Western Conference wild-card positions, are coming off a 2-1 victory over the San Jose Sharks on Saturday. The Stars were not at their best against the floundering Sharks, but they still are on a 10-3-2 run at a pivotal part of the season.

“We got the job done in the third period,” coach Rick Bowness said. “They’re hard to play against, the teams that are out of the playoffs. They have a lot of speed over there, a lot of young players, and they made it hard for us to play. We battled through. That’s all that matters. Find a way to win.”

Dallas will need more of that determination during a crucial three-game Western Canada road trip. While the Stars are running neck and neck with the Nashville Predators in the two wild-card spots, they are well aware the Vegas Golden Knights sit four points behind them.

“We know the type of road trip we have ahead of us, obviously three good teams (Vancouver, Edmonton Oilers, Calgary Flames),” goaltender Jake Oettinger said. “All three are either in the playoffs or fighting for their lives. We had to take care of business here at home and set ourselves up for a great road trip. If we take care of business on the road, the last week of the season we won’t really need to rely on anyone (to qualify for the playoffs).”

So the Stars will gladly take more ugly wins akin to the San Jose victory.

“At this point of the year, we’re just looking to get two points,” forward Luke Glendening said. “It wasn’t our best game, but we found a way and those are two huge points.”