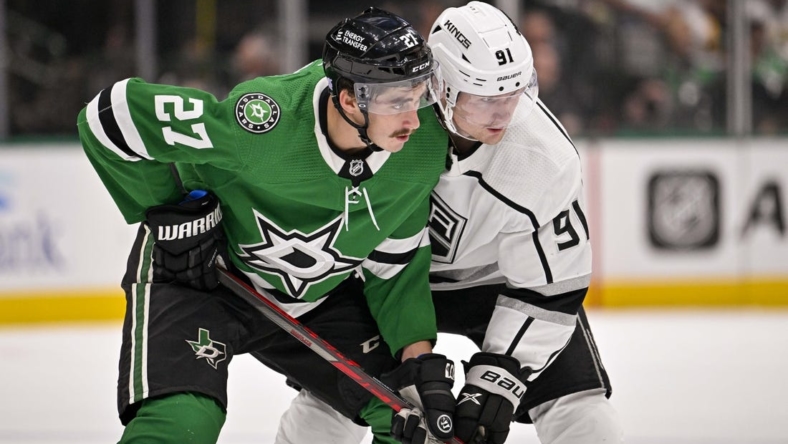 Roope Hintz had two goals and an assist for the Dallas Stars in a 5-2 win against the visiting Los Angeles Kings on Tuesday night.

Jason Robertson had a goal and two assists, Tyler Seguin and Joe Pavelski also scored and Scott Wedgewood made 30 saves for the Stars, who scored three goals in a 90-second span of the second period to break open a tied game.

Kevin Fiala and Arthur Kaliyev scored, and Cal Petersen made 35 saves for the Kings, who were coming off a 5-1 win at the St. Louis Blues on Monday night.

The Stars went 3-for-4 on the power play.

Robertson began the 90-second barrage with a power-play goal at 9:01 that gave Dallas a 2-1 lead.

Kaliyev cut the lead to 4-2 when he scored on a power play at 14:37, but the Stars re-established their three-goal lead when Pavelski scored the third power-play goal of the game to make it 5-2 with 1:23 left in the second period.

Jamie Benn and Miro Heiskanen each had two assists for Dallas.

Fiala was in the penalty box for tripping Pavelski when Hintz scored on a one-timer from the left faceoff dot for a 1-0 lead at 6:49 of the first period.

Peterson made a save on a breakaway by Ty Dellandrea with 6:01 remaining in the first period to keep it a one-goal game at the intermission.

Fiala tied it 1-1 at 5:21 of the second period when he put in a long rebound after Wedgewood made a save on Carl Grundstrom’s breakaway, but the Stars scored four goals over the remainder of the period to take the commanding lead.

The Stars did not have No. 1 goalie Jake Oettinger, who sustained a lower-body injury against the visiting New York Rangers on Saturday and will be re-evaluated in a week.