Stars aim to get back on track vs. Blackhawks 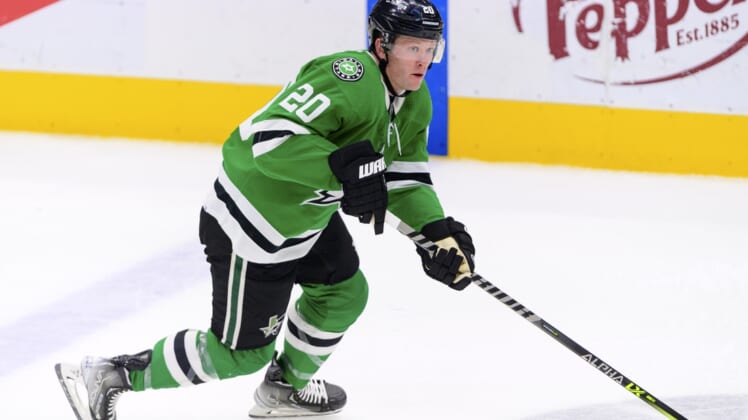 The Dallas Stars hope to get back to winning when they visit the Chicago Blackhawks on Sunday night.

Stars coach Rick Bowness said he was disappointed by his team’s lackluster performance.

“There wasn’t near enough desperation in our game,” he said. “It’s everybody. They (the players) can’t point fingers because it was everybody.”

With 84 points, Dallas is tied with the Vegas Golden Knights for the second wild-card spot in the Western Conference. Both trail the Nashville Predators by two points. The Stars and Predators each have 11 games remaining and the Knights nine.

Bowness said he didn’t think the Stars looked like a team battling to reach the postseason. The coach said it was one of the most disappointing games the Stars have played all season.

“We didn’t look like a team that wanted to make the playoffs,” Bowness said. “If we play like that, we’re going home in three weeks. It’s as simple as that.”

Dallas defenseman Ryan Suter, who scored the Stars’ lone goal against New Jersey, agreed with Bowness that the Stars need to improve if they want to keep playing after April.

“Every team in this league is good. The teams in the playoffs are there for a reason. There’s no easy game,” Suter said. “We have to make sure we’re prepared for tomorrow because they’re (Chicago) going to come hard.”

The Stars will be without goalies Braden Holtby, who is day-to-day with a lower-body injury, and Ben Bishop (knee), who is on long-term injured reserve.

The Blackhawks, meanwhile, have struggled to move up from near the bottom of the Central Division. Chicago (24-36-11, 59 points) hasn’t won since March 24, a stretch of six games.

Chicago’s latest loss, 2-0 to the Seattle Kraken on Thursday, was unacceptable, according to interim coach Derek King. The coach blamed his players’ lack of “urgency” for the setback.

“No urgency and too many passengers. Simple. That’s it in a nutshell,” King said.

King lauded goaltender Kevin Lankinen as one of the team’s few bright spots. He blamed the defense’s lack of support for the Blackhawks’ loss.

“Lanks played a great game; he had no support and I’m going to have to address that,” King said.

Lankinen, who has an .890 save percentage this season, is a player King said he hopes the Blackhawks will build around.

Forward Alex DeBrincat echoed King’s disappointment about lack of support and said he thought that both the offense and defense needed to step up.

“We’ve got to have some better d-zone coverage and make sure they can’t get those pucks through and create some offense,” DeBrincat said.

Murphy is on long-term IR while Khaira is expected to miss the rest of the season following back surgery.