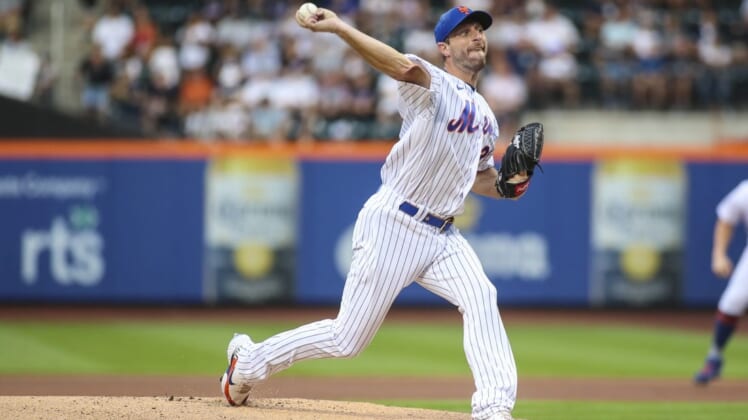 The Mets have won three straight following a three-game losing streak to extend their lead in the National League East to three games. The Yankees, who entered Wednesday with the best record in baseball, are 2-5 since the All-Star break and 10-12 this month.

Eduardo Escobar led off the ninth by doubling on the first pitch thrown by Wandy Peralta (2-3). Escobar went to third on a bunt by Tomas Nido and remained there when Brandon Nimmo was credited with a single when Peralta momentarily bobbled his comebacker.

Marte then ripped a 1-0 pitch beyond shortstop and into left field to score Escobar. Marte raised his arm as he rounded first base before being wrapped up by Pete Alonso and Nimmo as their teammates mobbed them at second base.

Max Scherzer wiggled in and out of trouble over seven scoreless innings for the Mets, who carried a 2-0 lead into the eighth thanks to a Pete Alonso homer leading off the second and Francisco Lindor’s RBI single in the third.

But David Peterson, the Mets’ unofficial sixth starter, gave up the lead in five pitches in the eighth, when he issued a four-pitch walk to Anthony Rizzo before Gleyber Torres homered to right.

Scherzer, pitching on his 38th birthday, allowed five hits and walked two while striking out six. In five starts on his birthday, Scherzer is 3-1 with a 0.82 ERA.

Domingo German, making his second start of the season after missing the first half with a right shoulder injury, gave up two runs on five hits and two walks while striking out seven over 4 2/3 innings.