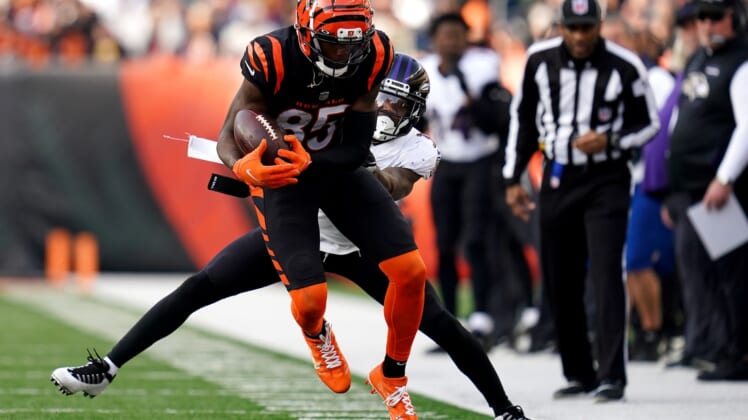 Playmaking receivers for the Kansas City Chiefs do not have to be named Travis Kelce or Tyreek Hill.

Patrick Mahomes insists “any game can be anybody’s week” and proved his point last week when Kelce was among several Chiefs sidelined by COVID-19 and Hill just coming off the virus.

Each is expected to be at full strength Sunday when Kansas City (11-4) carries an eight-game win streak into Cincinnati for an AFC showdown against the Bengals (9-6).

The Chiefs look to close in on the No. 1 seed in the AFC for the third time in the four seasons since Mahomes has engineered their attack.

Kansas City holds a one-game advantage over Tennessee in the chase for the first-round bye and homefield advantage that goes to the top seed.

When asked how the Chiefs overcame a 3-4 start, Mahomes said, “nobody held their head down. We knew there was a lot of season left and everything we wanted was right in front of us.

“Our guys came in with the right mentality every single day to get better and we’re sitting where we’re at right now, but the job’s not finished.”

Kansas City’s resolve has rarely been more evident than during last week’s 36-10 dismantling of Pittsburgh, when Byron Pringle rose up to catch six passes for 75 yards and two touchdowns. The Chiefs also relied on multiple rushing threats, though starter Clyde Edwards-Helaire suffered a shoulder injury and will miss the Cincinnati game.

A significant challenge awaits from the Bengals, who need only a win to clinch their first AFC North title since 2015. Joe Burrow is coming off a franchise-record 525 yards passing in a rout of Baltimore, going 37 of 46 with four touchdowns.

“He’s a smooth operator,” said the Chiefs’ Andy Reid, who will observe his 400th game as an NFL head coach Sunday.

Tee Higgins has been surging, posting 583 yards receiving in the last five games. Both he and rookie Ja’Marr Chase have more than 1,000 receiving yards on the season, a feat also achieved by the Chiefs’ Kelce and Hill.

Kansas City counters with an offense ranked third in the NFL, while its defense has allowed an average of 11.4 points during the nine-game win streak.

“We’re going in expecting to score a lot of points and we’ll have to adapt accordingly,” Burrow said.

Cincinnati has won its last two but has yet to win more than two straight this season. The Bengals’ convincing win over the Ravens, however, is potentially part of a season-ending uptick.

“No moment is too big for our guys right now. They’ve risen to the occasion in a lot of different games,” Bengals coach Zac Taylor said. “Our guys have had the right mentality, an aggressive mentality.”

Cincinnati’s Germaine Pratt has been placed on the COVID-19 reserve list. Another defender, D.J. Reader (COVID-19), could remain out after missing the Baltimore game. Mike D. Thomas has been reinstated to the active roster and taken off the COVID-19 list. Cam Sample (hamstring) and Jalen Davis (ankle) did not practice Wednesday.

After a rash of COVID-19 infections riddled Kansas City’s two-deep a week ago, everyone on the 53-man active roster was free of the virus when preparations for the Bengals began Wednesday. The Chiefs return their leading receiver (Kelce), leading tackler (Nick Bolton) and leading scorer (Harrison Butker).