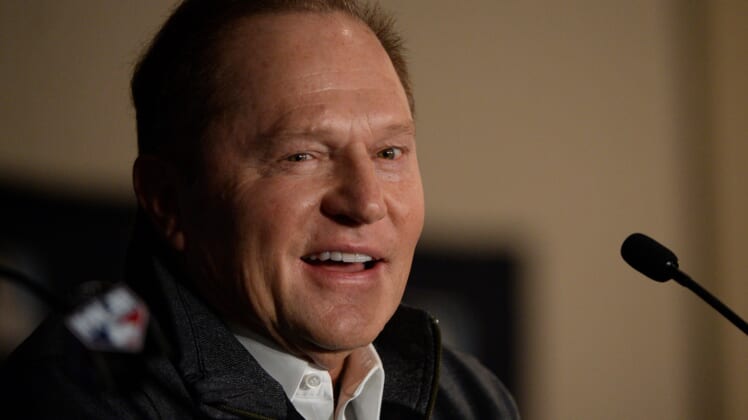 As MLB continues to look for ways to grow the game and attract more fans to watch and play baseball, the league’s decision to shorten the 2020 MLB Draft might just do the opposite.

Superstar agent Scott Boras, who helped his top free-agent clients land more than $1 billion in contracts this offseason, is coming after MLB following the league’s decision to shorten the 2020 MLB Amateur Draft from 40 to five rounds.

MLB made the decision as part of a cost-saving measure for team owners amid the COVID-19 pandemic. Under the one-year policy, the draft will be just five rounds this year with organizations allowed to sign an unlimited number of players for no more than $20,000.

The one-year policy will reduce the number of players drafted from 1,200 to 150 this year with bonuses significantly limited. As part of an agreement MLB reached with players, teams can defer a majority of the payments to top picks into future years and the new rules will save each club millions this season.

“We probably should have bought a billboard that said, ‘Go play other sports after Little League,” Scott Boras said, via The Athletic. “Goodbye.’”

MLB owners have been pushing for years to cut down the size of the MLB Amateur Draft significantly and they are currently working to reduce the size of MiLB. By shortening this year’s draft, a move that likely sets a precedent for future years, owners are getting what they hoped for.

As noted by Baseball America’s JJ Cooper, many around the league believe this will carry lasting implications for MLB. Undrafted players that don’t have significant financial support will likely be unable to live on the $20,000 for a year and will need to work full-time jobs. As a result, those young players will not be able to train as much as they need to in the offseason, which they normally could do in previous years when they’d sign for $100K-plus.

Due to the new policy, baseball could be losing a significant number of players that it usually would have in the system. It will ultimately hurt the sport this year with every team likely to lose significant depth and it could rob fans of future stars of the game.

Boras might have a reputation for going over the top at times, but his feelings are likely shared by many around the game. If making baseball more accessible to fans and more attractive to athletes was MLB’s goal, this decision goes entirely against that.