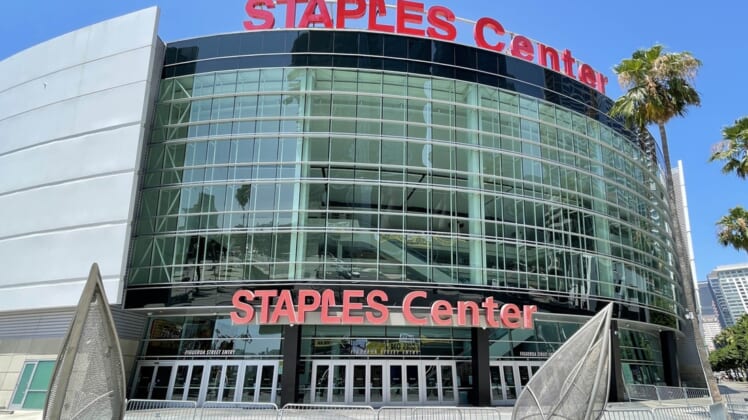 While the city of Los Angeles passed stricter vaccine requirements Wednesday for indoor businesses and venues, the new rules won’t impact Staples Center, home of the NBA’s Lakers and Clippers as well as the NHL’s Kings, according to the building’s operator.

Beginning Nov. 29, indoor restaurants, malls, theaters, beauty salons, gyms and other facilities in Los Angeles will require anyone who enters to be fully vaccinated.

However, management of the Staples Center and the neighboring Microsoft Theater issued a statement Thursday clarifying that the two sites already were subject to a separate Los Angeles County Department of Public Health edict regarding admittance.

“STAPLES Center and Microsoft Theater will continue to follow the protocols established by the Los Angeles County Department of Public Health (LACDPH) which requires guests to show proof of being fully vaccinated or providing proof of a negative COVID-19 test 72 hours prior to event date in addition to wearing approved face coverings when not actively eating or drinking,” the statement read.

The distinction means that players on the Lakers, Clippers and Kings in theory could enter Staples Center with proof of a negative COVID test even if they are unvaccinated. However, the Kings have stated that their full roster is vaccinated, and the Clippers and Lakers have said they believe all of their players will be vaccinated before the season opens in two weeks.

Both New York and San Francisco have regulations in place requiring vaccination to enter indoor sites including the cities’ NBA arenas.

Golden State Warriors players must be vaccinated to enter the team’s home site, Chase Center. Players on the New York Knicks, who play at Madison Square Garden, and the Brooklyn Nets, who play at Barclays Center, must have received at least a first vaccine dose to enter the facilities.

Brooklyn star Kyrie Irving, who previously stated that he was unvaccinated, was ruled out by the Nets for their Friday home preseason game against the Milwaukee Bucks, a likely indication that he still hasn’t received a vaccine shot. Although Irving was part of the Nets’ training camp in San Diego, he did not play Wednesday in the team’s preseason opener against the Lakers at Staples Center.