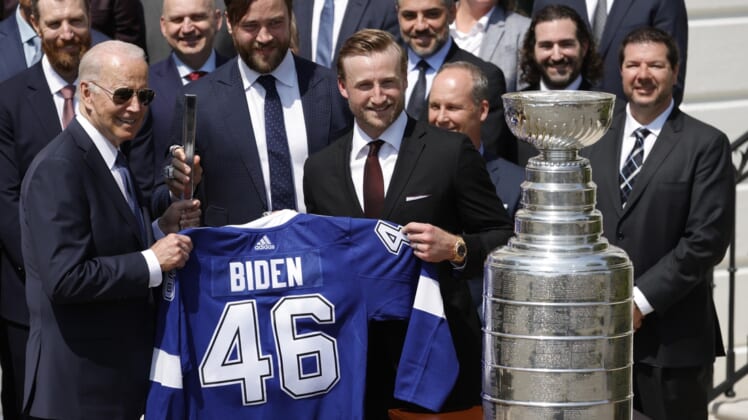 It was a long time coming, but the Tampa Bay Lightning finally celebrated their Stanley Cup championships at the White House on Monday.

Though the Lightning won the Stanley Cup three times, it was the first time the team was honored at the White House by a sitting president. The NHL’s lockout in 2004-05 kept the team from going to Washington after that title, and the pandemic pushed back Monday’s visit until after Tampa Bay claimed back-to-back championships.

In honoring the Lightning for their titles the past two seasons, President Joe Biden praised the team’s efforts amid the pandemic and noted that first lady Jill Biden had attended a vaccination event at the team’s arena last year.

“I’m not saying that the first lady being there at your arena during the playoffs is why you won,” Biden said. “But just saying that she was there during the election season, as well. She seems to show up when people win. Just something to think about.”

The majority of the last season’s team was in attendance Monday — there were no noticeable absences — and some players from the 2019-20 club made appearances.

“Pretty much everybody was on board, and everybody that could make it — former players and stuff — they all tried to make it here,” alternate captain Ryan McDonagh said. “It’s just a great tradition that we have: You become part of a championship team, you get to go to the White House and meet the president.”

“It was a long time in the making,” captain Steven Stamkos said. “We weren’t sure if we were going to get this opportunity, but it was certainly worth the wait.”