Stanford holds off Wyoming to advance at Hawaii 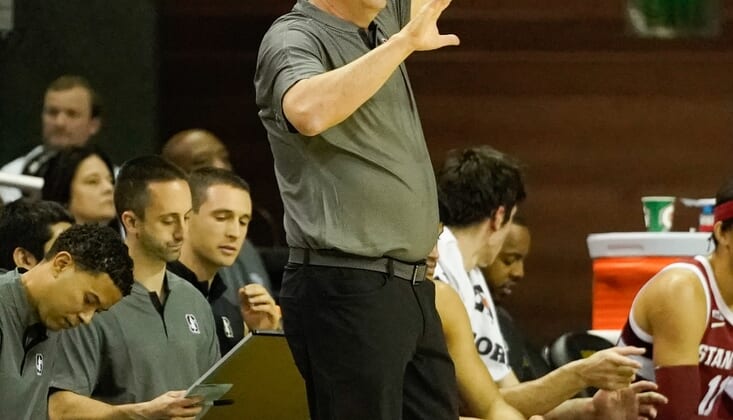 Spencer Jones and Michael O’Connell combined for 11 of Stanford’s final 14 points and the Cardinal survived a collection of missed free throws by both teams in the final seconds to record a 66-63 victory over Wyoming in the first round of the Diamond Head Classic at Honolulu on Wednesday.

Successfully rebounding from a loss to 17th-ranked Texas at Las Vegas on Sunday, the Cardinal (7-4) will move on to face Liberty, a 76-74 winner over Northern Iowa, in one of Thursday’s semifinals.

Following a second loss in three games after an 8-0 start, the Cowboys (9-2) will meet Northern Iowa in a Thursday consolation-bracket game.

The Cardinal prevailed in a wild finish during which two free throws by Jaiden Delaire had put Stanford up 64-61 with 45 seconds left.

Wyoming had a chance to tie when Graham Ike, the game’s leading scorer with 25 points, was fouled while converting a layup with 32 seconds to go. But Ike missed the ensuing free throw, allowing Stanford to retain a one-point lead.

The advantage increased to two when O’Connell hit a foul shot with 26 seconds remaining, and then three when Harrison Ingram, after rebounding a miss on O’Connell’s second attempt, also made one of two free throws with 24 seconds left.

The Cowboys then got two more opportunities to tie it, but Xavier DuSell misfired on a 3-pointer with four seconds left and Hunter Maldonado couldn’t connect on another as time expired.

Delaire finished with a team-high 17 points and had seven rebounds for Stanford, which used a 13-7 edge in free throw points to overcome a 42.6 percent to 38.7 percent disadvantage in shooting. Jones had 15 points, while O’Connell added nine points, five rebounds and a team-high five assists.

Ike completed a double-double with a game-high 11 rebounds for Wyoming, which shot just 4 of 23 (17.4 percent) on 3-pointers. Maldonado collected a game-high eight assists to complement 18 points, while DuSell finished with 13 points.

But Jones and O’Connell then took control of the game, starting with Jones hitting a tying layup with 5:59 left and O’Connell a go-ahead jumper at the 5:17 mark. Stanford never trailed again.