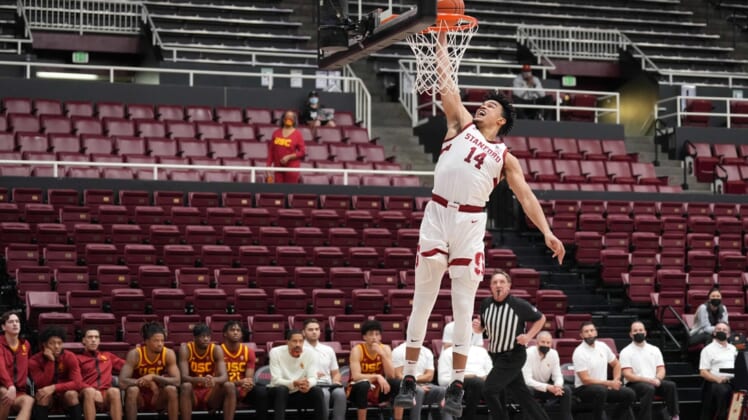 Harrison Ingram and Spencer Jones each scored 21 points, and host Stanford handed No. 5 Southern California its first loss of the season in a 75-69 decision Tuesday.

The Cardinal (9-4, 2-1 Pac-12) shot more efficiently than any of the Trojans’ prior opponents thus far in the campaign at 25-of-57 from the floor. That included 10-of-24 shooting from the 3-point line, including three apiece from Ingram and Jones.

Ingram also grabbed a game-high 10 rebounds and shot 6-of-7 from the free-throw line.

Stanford showed no ill effect from a long layoff due to COVID-19 pauses, particularly down the stretch. The Cardinal last played Dec. 23 in the semifinal round of the Diamond Head Classic in Honolulu.

The Cardinal made seven free throws in the final three minutes and snuffed out any hope of a Trojans comeback when Jones scored on a breakaway layup against USC’s pressure defense.

While giving up a season-high for opponent field-goal percentage on one end, USC made just 21 of 49 from the floor on the other. That was more than six percentage points off its season average coming into Tuesday’s contest.

Mobley only attempted five field goals, however. He faced foul trouble, and a swarming Stanford defense that sent him to the foul line for nine attempts, where he made seven.

Boogie Ellis scored 14 points, but shot just 4-of-11 from the floor.

USC came into Stanford with its highest ranking since December 1974. The loss leaves reigning national champion Baylor, which Stanford also played this season, as the nation’s sole remaining unbeaten.