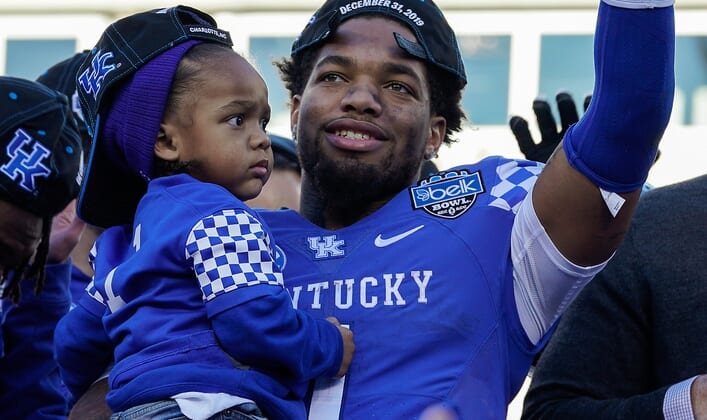 The college football season provided fans with a bittersweet day on Tuesday. An entertaining five-game slate of bowl games on New Year’s Eve, the final football games of 2019. While it’s sad to see football end in 2019, the year ended with a bang thanks to some incredible performances.

The fireworks started early in the Belk Bowl with the Kentucky Wildcats and Virginia Tech Hokies combining for 67 points. The Hokies seemed destined for a celebration until Wildcats quarterback Lynn Bowden Jr. capped off his record game and collegiate career on the perfect note.

The Sun Bowl and Liberty Bowl provided some heart-racing finishes as well. Both came down to the fourth quarter and put some incredible talent on display with several offensive players standing out. Meanwhile, Wyoming dominated the Arizona Bowl with running back Xazavian Valladay delivering a performance for the ages.

Texas arrived for the Alamo Bowl with everyone expecting No. 11 Utah to cruise. Instead, quarterback Sam Ehlinger ended an underwhelming seasons with a performance that will give the program and fan base hope for 2020 following a blowout win.

After ending the regular season with a jaw-dropping performance, Bowden Jr. ended his collegiate career on an equally impressive note. The junior dominated on the ground for most of the game, finishing with 233 rushing yards and two scores on 34 carries. Then, when his team needed its biggest play, Bowden Jr. surprised the defense with his arm.

While he only finished with 73 passing yards on the day, Bowden Jr. made the biggest throw in the most significant moment. Virginia Tech expected the run and the junior burned them with the game-winning touchdown pass. He also broke the FBS record for rushing yards by a quarterback in a bowl game. While Bowden Jr. won’t be a quarterback in the NFL, he’ll be a weapon that smart coaches will know how to use.

It’s not always about volume for players. Sometimes, they have to make the best of limited opportunities and that’s exactly what McLease did in the Belk Bowl. While the Hokies only fed him the ball 13 times, the junior made each of them count with 143 scrimmage yards and a touchdown. One has to wonder if the Hokies would have won if they gave him more touches on Tuesday. While McLease fell short of his first 1,000-yard season, he might have an opportunity to hit it next season if he returns as a senior.

Nothing went right for the Seminoles this season. Much of what we saw in the Sun Bowl put that on display, but it also gave everyone a shot to look at the player who will be critical to turn Florida State around in 2020.

“Scary Terry” made the best of atrocious play from quarterback James Blackman. When he got a rare opportunity to go deep and make a play, Terry torched Arizona State’s defense for a 91-yard touchdown. Terry is the ultimate playmaker and it showed on Tuesday with 165 receiving yards and 18 rushing yards. If he can protect the football in 2020, the 6-foot-4 sophomore receiver could be one of the nation’s top receivers in Mike Norvell’s scheme next year.

It’s been a treat to watch Perry this season. While it’s a shame we didn’t get to see him in this role last season, the Liberty Bowl gave us one more chance to appreciate Navy’s star quarterback.

As always, Perry dominated his opponent with his legs. Kansas State simply had no answer for Navy’s triple-option attack and this incredible dual-threat quarterback. Perry rushed for 213 yards on 28 carries, ripping off big runs on nearly every drive. He also was efficient as a passer, completing five-of-seven attempts with a touchdown. We can’t wait to see him become a weapon and represent his fellow cadets in the NFL.

The New Year’s Eve bowl games treated us to some impressive performance on the ground and even through the air by a few receivers. Doing one of those things wasn’t enough for Valladay. He wanted to leave everyone’s jaw on the floor with an incredible showing.

Valladay’s work as a receiving back alone merited consideration for this list. The sophomore finished with 91 receiving yards on three receptions, in part thanks to a 61-yard highlight play. He overwhelmed Georgia State’s defense all game, using a variety of moves and his power to explode for 204 rushing yards. He easily won the MVP award with 295 scrimmage yards and two touchdowns – not a bad way to end the year. We’re excited to see what Valladay does in 2020.

On a day when Arizona State’s offense struggled to move the ball consistently, Robertson and the defense stepped up with an unbelievable effort. Simply put, the sophomore linebacker repeatedly stuck a fork into Florida State’s offense.

While Robertson’s six tackles don’t jump off the sheet, he created pressure in the backfield with 1.5 sacks and two tackles for loss. Better yet, he forced two fumbles, including one to seal Arizona State’s win, and recovered a fumble. While there were certainly a few impressive defensive performances today, none match the numbers and impact Robertson delivered.

Texas came into the Alamo Bowl as the underdog with plenty of questions about how the team would look after significant changes to the coaching staff. If Tuesday’s game is any indicator, the Longhorns could return to national prominence in 2020.

Ehlinger showcased the abilities that made some view him as a Heisman Trophy candidate before the season. Facing Utah’s typically dominant defense, he picked apart its secondary and found all kinds of gaps to run through. After coming into this game as a seven-point underdog, the Longhorns rolled to a 38-10 victory behind Ehlinger’s four total touchdowns with 73 rushing yards and 201 passing yards. He’s expected to return for his senior year and that would be outstanding for college football.