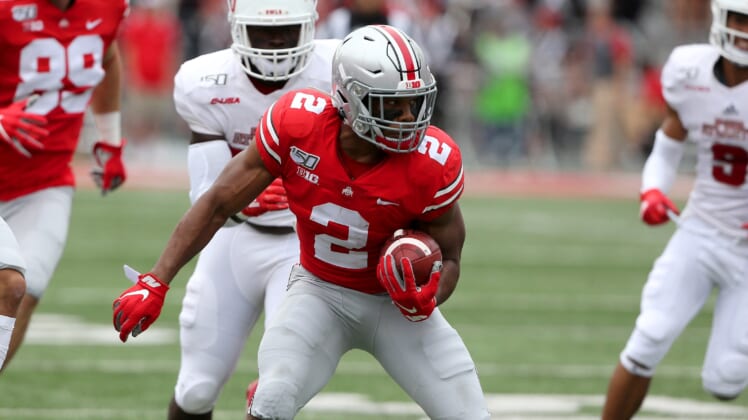 College football fans were treated to some big-time performances Friday night, with a couple of running backs stealing the show.

The first game of the evening pitted Marshall against Florida Atlantic and provided three of the young players we’re featuring in our weekly standout list. That offensive showdown offered just a taste of what was to come, as Ohio State lit up Northwestern while Syracuse and Pitt slugged it out.

These are the players who wowed us with their spectacular play Friday night.

This sophomore running back was already having a pretty decent year before Friday night. Then, he got a fortuitous matchup against a weak FAU defense and took full advantage with a career game.

Knox rushed for 220 yards and two touchdowns on 23 carries. His long run was a 43-yard gallop, and he rushed in the game-winning score.

The power back also caught a couple of passes for six yards on a night he won’t soon forget as the Thundering Herd came back to win it on the road in Boca Raton.

The Owls moved the ball a ton through the air Friday night, though they were unable to score with the passing game in a losing cause. Quarterback Chris Robison spread the ball around to seven targets on the night, but his go-to receiver was clearly Deangelo Antoine.

The senior hauled in seven passes for 111 yards. His longest reception of the evening was a 35-yard catch that set up a two-yard rushing score late in the fourth quarter. Unfortunately for Antoine and the offense, FAU’s defense collapsed down the stretch.

Pittsburgh Panthers running back A.J. Davis came into Friday night’s game against Syracuse with 184 yards and two touchdowns on the season. He nearly doubled up his totals with a big night to help his team win a big road game.

Davis consistently ripped off positive gains to finish the evening with 103 yards and a touchdown on the ground, adding another six yards on one reception.

We’ve seen some truly jaw-dropping performances from Justin Fields this year. Friday night’s showing against Northwestern wouldn’t rank up there with his best, but he was razor sharp and managed the game perfectly, utilizing his right arm with lethal efficiency.

Playing roughly three quarters, along with the majority of Ohio State’s starters, Fields passed for 194 yards and four touchdowns while completing 18-of-23 passes.

This big tight end didn’t have a monstrous evening on the stat sheet. He finished the game with just four catches for 70 yards. But he did provide one of the biggest highlights of the evening in any game on television.

At the end of the first quarter, Marshall down by the score of 14-3, Armani Levias caught a short slant. Then, he turned upfield dragging multiple defenders behind him before finally breaking free on an electric 59-yard touchdown.

Big plays in the passing game were hard to come by for Syracuse, which saw starting quarterback Tommy DeVito exit with an injury after taking many hard shots. One play in the third quarter gave the Orange new life, though, and it’s the reason why Taj Harris makes it onto this list.

Facing 3rd-and-9 from his own 6-yard line, backup quarterback Clayton Welch unleashed a prayer to a streaking Harris. That prayer was answered, and 94 yards later Harris was in the end zone on a stunning touchdown. He finished with three catches for 111 yards, most of which came on that one amazing play.

Northwestern isn’t an elite team, but the Wildcats are tough defensively. That didn’t matter to J.K. Dobbins, who got some outstanding blocking up front and made the most of his chances with a tremendous overall game on the road.

The running back pretty much made an entire scoring drive happen all by himself in the second quarter.

Dobbins racked up 151 yards and two touchdowns from scrimmage as Ohio State blew out their Big Ten rival and stayed perfect on the season.

As we mentioned above, Syracuse quarterbacks had a miserable night thanks to relentless pressure applied by Pitt’s defensive front. The Panthers racked up an incredible nine sacks against the Orange Friday night.

Because two players can be credited for a single sack, 10 different Panthers defenders got credit for at least one-half a sack. Senior linebacker Kylan Johnson led the way with 1.5 sacks as Pitt dominated up front from start to finish.