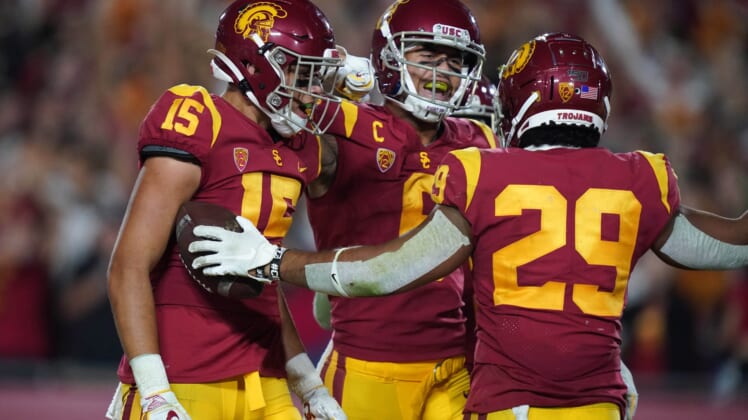 College football fans were in for a treat Friday night in Week 4 as some big-time games entertained from start to finish.

The appetizer was Florida International against Louisiana Tech, and that game got weird quickly with a wild, wacky interception in the first quarter. Then, an hour after that game kicked off, USC hosted No. 10 Utah on the West Coast while No. 20 Boise State hosted Air Force.

Big plays and impressive performances weren’t hard to find. These are the players who stood out the most Friday night in college football Week 4.

One of the more dominant interior linemen in college football this year, Leki Fotu made his impact felt almost immediately Friday night against USC. The 6-foot-5, 335-pound senior knocked Trojans quarterback Kedon Slovis out of the game on the first drive of the night for USC, hitting him cleanly but coming down hard with all his weight.

Fotu continued dominating the trenches throughout the night, helping Utah keep USC from doing anything on the ground. His Jadeveon Clowney-esque forced fumble of Stephen Carr in the second quarter was a perfect example of his unstoppable play. Just an incredible performance by a future NFL star.

Every time USC needed a big play through the air, it seemed like Michael Pittman was the special delivery man. He utilized every inch of his 6-foot-4 frame to dominate Utah’s cornerbacks on the perimeter, often going up high to bring down passes on the sideline.

The senior was unstoppable downfield. He hauled in 10 passes for 232 yards, and his stunning 77-yard touchdown in the third quarter broke the game open for the Trojans at home.

The Boise State Broncos needed a spark in the second quarter, and they got it when Hank Bachmeier found CT Thomas on a 36-yard touchdown

Thomas continued to be Bachmeier’s go-to receiver all night long in a tough matchup against Air Force and came up big a number of times. All told, he finished with five receptions for 119 yards and the score.

This sophomore safety looks more like a linebacker, and he racked up tackles like one, too, on Friday night against Utah. Talanoa Hufanga was seemingly everywhere for the Trojans defending the run, the pass, and making his presence felt on blitzes.

Hufanga’s big-play ability was on full display early in the fourth quarter when his tackle of tight end Cole Fotheringham at the three-yard line stopped what would have been a touchdown. Instead, the Utes stalled in the red zone and settled for a field goal. Hufanga racked up double-digit tackles and was the best defender on the field for the Trojans.

It seemed like every time Justin Henderson touched the ball Friday night against Florida International, he was doing something special.

The Junior running back was a scoring machine for the Bulldogs, racking up three total touchdowns.

He also tallied 141 yards on just 15 carries and was the most productive offensive playmaker on the field for both teams.

When the season opened up, Matt Fink was the No. 3 quarterback on USC’s depth chart. An injury to JT Daniels shuffled up the rotation, and freshman Kedon Slovis was thrust into the starting lineup. On Friday night, however, Slovis didn’t make it out of the first series. In his stead, Fink jumped into the game and immediately proved he’s no slouch leading the Trojans to a touchdown.

Aside from one ghastly interception he’d love to have back, Fink’s night was spectacular from start to finish. He was fearless, attacking Utah’s vaunted defense without a care in the world. All told, this third-stringer took down the No. 10 team in the nation with a night to remember, passing for 351 yards and three touchdowns while showing some serious magic along the way.