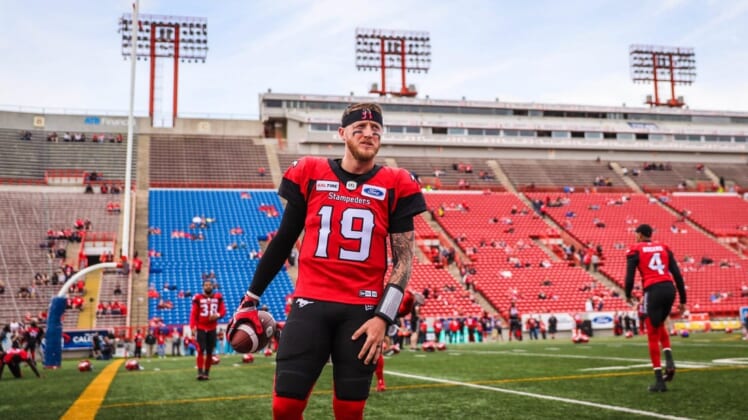 The Calgary Stampeders look to avoid a slow start for the second straight year on Thursday when they kick off the CFL season against the visiting Montreal Alouettes.

The Stampeders lost four of their first five regular-season games in 2021 before winning seven of their final nine. Their momentum was halted, however, after dropping a 33-30 decision in double overtime to the Saskatchewan Roughriders in the Western Semi-Final.

Calgary has made a strong statement with a pair of convincing victories in the preseason. The Stampeders breezed to a 41-6 romp over the B.C. Lions on May 28 and a 37-7 triumph over the provincial-rival Edmonton Elks on Friday.

“I think we’ve got a lot of improving to do. I don’t really feel like the score’s indicative of what’s going to happen next week at all,” Stamps coach Dave Dickenson said last Friday, per the Calgary Sun. “I think you’re going to start seeing real close games again and having to win in the fourth quarter. We’re going to try to focus on winning those last three minutes of every game, and if we do that, I think we’ll get quite a few wins.”

Two-time CFL Most Outstanding Player Bo Levi Mitchell looks to bounce back from an injury-riddled 2021 season in which he finished with more interceptions (13) than passing touchdowns (10).

Ka’Deem Carey rushed for a CFL second-best 869 yards with seven touchdowns in 2021. The former Chicago Bears running back had two touchdowns in Calgary’s 28-22 win over Montreal last summer.

Dedrick Mills, who has positioned himself as a capable backup, rushed for 109 yards and two scores in the Stampeders’ preseason victory over the Elks.

The Alouettes averaged a league-best 22.4 points per game last season and finished with a 7-7 record. The team, however, dropped a 23-12 decision to the Hamilton Tiger-Cats in the East Semi-Final.

Vernon Adams Jr. was named the team’s starting quarterback despite throwing three interceptions in Montreal’s 27-26 preseason win over Ottawa on Friday. He was playing for the first time since fracturing his left arm against the Redblacks in October.

“I just think Vernon’s the right person for the job at this point,” Alouettes coach Khari Jones said, per the Montreal Gazette. “He’s been in the system for a long time. Not only can he do things from inside the pocket, he can do things from outside the pocket. He makes things happen with his feet. He’s won games here.”