Stampeders have history, talent on their side when Elks visit 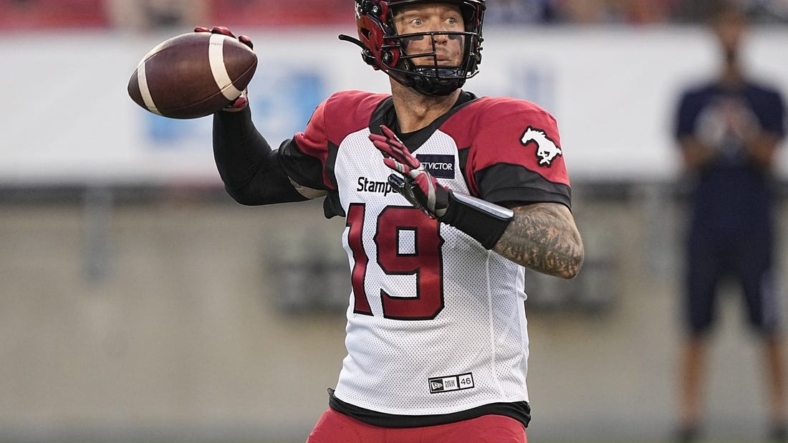 Overconfidence would seem to be a tougher opponent for the Calgary Stampeders than the Edmonton Elks when the teams meet Monday in Calgary.

Not only are the Stampeders 6-4 and the Elks 3-8, there’s also the memory of what happened on July 7 in Edmonton. That’s when the Stamps took the Elks behind their own woodshed for a 49-6 beating, getting 279 passing yards from Bo Levi Mitchell, 104 rushing yards from Ka’Deem Carey and 150 receiving yards from Malik Henry.

But Stamps coach Dave Dickenson isn’t acting like someone expecting to cruise through a holiday matinee on his home field.

“We know we’re going to get their best,” Dickenson said. “They’re fast, physical, they’ve got athletes. They can still beat any team in our league, I guarantee that.”

Dickenson’s comments aside, it’s hard to see a scenario under which Edmonton beats Calgary. Not only did Edmonton match up poorly nearly two months ago, it also enters this rematch short-handed.

The Elks traded perhaps their best offensive lineman, David Beard, to Hamilton. They are going to be without starting running back James Wilder Jr., as well as starting receivers Kenny Lawler and Emmanuel Arceneaux. Lawler had 146 receiving yards last week in a 25-18 home loss to Ottawa.

Edmonton coach Chris Jones is aware his team’s recent history against Calgary isn’t good, but believes anything can happen in the matchup of Alberta rivals.

“History’s history, but it’s not like we haven’t come down here and won before,” Jones said. “It’s a different Calgary team than any other Calgary team on this particular day. So we’ve got to come out and just play our game.”

That game simply hasn’t worked unless the Elks are playing one of the weaker East Division teams. All three of their wins have been on the road in the east. Ottawa’s win last week was a rematch one week after Edmonton’s 30-12 decision in Ottawa.

The Stamps and Elks play for the second time in six days on Saturday night in Edmonton.