RAIDERS STADIUM: Benefits Plan A Winner So What’s the Problem? 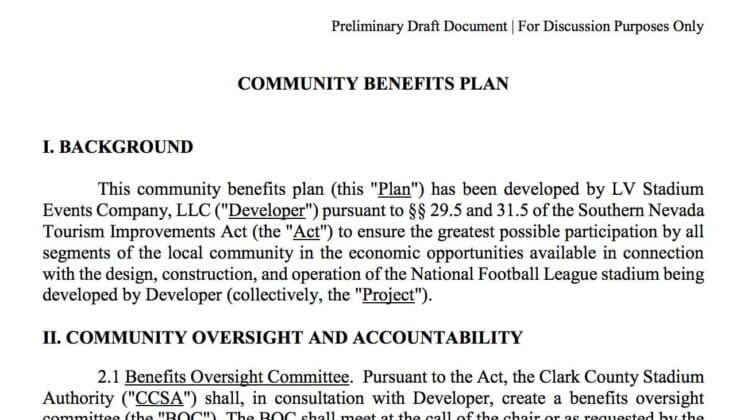 There’s been much discussion and work on the Raiders Community Benefits Plan for Las Vegas. The time for discussion is over – it’s time to let the team put it into action.

Sitting in the chambers of the Clark County Commission waiting for this month’s Las Vegas Stadium Authority meeting, I was reviewing the public documents of the meeting which included the much-discussed Raiders Community Benefits plan. Back when Senate Bill 1 became law ushering in the age of pro football in Nevada, our elected leaders insisted the Raiders draft a plan to ensure the team committed to the local community.

After a lot of gripes and heated discussion – often times completely off topic as the chamber becomes more of a psychology session – the Raiders came forward with a very aggressive plan the likes that have never been seen in NFL history or the history of stadium construction.

The Raiders organization has pledged to hire 38% of its construction labor for the building of the stadium from what they described as “targeted groups.” That includes women, minority, veterans, LGBT, and others to insure a diverse and representative local workforce. Then, after the stadium is completed, the team has committed to a workforce of over 50-percent – 55% to be exact – from those targeted groups. That is by far the biggest commitment of its kind ever made by an NFL franchise.

A point to make: the history of the Oakland Raiders is one of championing diversity. This started with owner Al Davis. The team has always been committed to it and this time is no different.

Despite this, a group of people still are not satisfied. They want more.

Yet, as I studied in preparation for this meeting, and I watched the video of past meetings, and listened to the complaints and demands, I just couldn’t put my finger on it. What were they really asking for? What was their gripe? Did they not want folks from their community working as part of the stadium development and operations?

After much discernment, the only answer I can come up with is money.

If you’re not interested in getting your people to work, and you can’t articulate why you have a problem with the plan, I can only assume you want something that isn’t really about the community and is more about your own selfish motives. You have several organizations opposed to this plan that claim to be doing good in the community but when you peel back the layers, that claim is very thin. Unfortunately, in many of our communities you see this all too often. Having worked with several nonprofits and community based organizations, they’re not all built the same nor are their motives always true. I think that’s what you have here in the case of the Raiders Community Benefits plan.

This meeting, in particular, got personal for some. Several of these community representatives took shots at specific board members. It seemed a bit staged and agenda-driven. Yet, again, no solutions are offered. Just complaints and delay tactics. It’s unproductive and is delaying the inevitable as it relates to the plan. In fact, these groups are now doing more harm and moving their own cause backwards.

One group that has been vocal about its disappointment with some of the plan is the Urban Chamber of Commerce. The Chamber’s President, Ken Evans, sits on the board as a non-voting member. Through lines of questioning and statements made by Mr. Evans and others from the Chamber, their assertion is the Raiders are not working closely enough with the community to hammer out a plan with their involvement. This is the crux of their issue – alleging the Raiders are not involving them enough in the plan.

Members of the Urban Chamber complain the Raiders aren’t doing enough to involve them. But the group is honoring the Raiders at their Green Tie Awards.

It’s an assertion that rings hollow when you look at the facts. It also makes little sense that the Urban Chamber would complain and, Mr. Evans assert, the Raiders aren’t doing enough yet honor the team and organization at an event this month. The Raiders are also a sponsor of the Chamber’s worthwhile Green Tie Awards (see picture). Do you honor a “community partner” who you say isn’t doing enough for your community? Something doesn’t add up.

Other Chambers – including the Latin Chamber of Commerce – have praised the Raiders organization thus far in the Las Vegas community going as far to say the team is going far beyond what it said it would do. Seeing the Raiders $50,000 donation after the 1 October shooting certainly points to that being true.

Still, other folks also aren’t happy with the Raiders not investing in their community. At this meeting, a very committed and genuine group of women spoke about the lack of redevelopment and investment in the traditionally black historic West Las Vegas. They spoke with passion, conviction, and purpose. I respect them for that but what does it have to do with the Raiders and the stadium? It’s not making a lot of sense.

For the project to move forward, and for the Raiders to start building this important project for all of Southern Nevada, people need to get to work. The continued badgering over the Community Benefits plan has gone on long enough. It’s a good plan that weaves in diversity and a commitment to local business and labor. It’s time to close the book on it and let the Raiders put it into action.