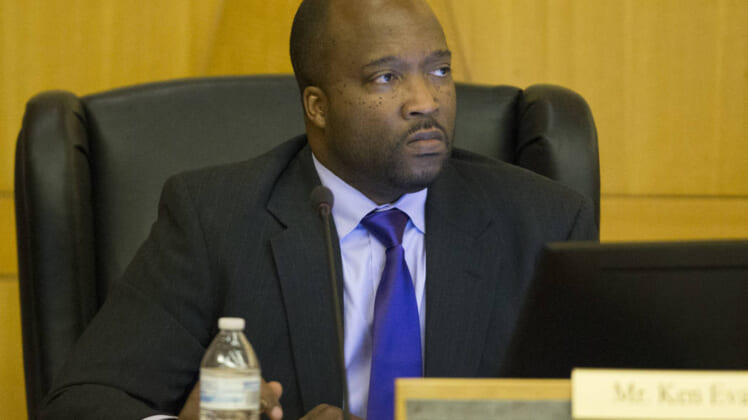 Another Las Vegas Stadium Authority board meeting came and went and the project is full-steam ahead. Yet, there are some small battles ahead.

The January meeting of the Las Vegas Stadium Authority board included many uneventful and procedural moments that aren’t very exciting to write about or discuss. Yet the appointment of a chairperson to the Community Benefits Oversight Committee may be an interesting battle if a small glimpse of the politics involved are any indication.

The Oversight Committee is an important piece in what was the one and only contentious (depending who you ask) issue in approving the Raiders aggressive and equitable Community Benefits plan. Despite factions whom still see the plan as lacking in inclusiveness, it continues to win praise and support from most of the minority community in Las Vegas.

The Committee’s role will be to monitor and report back to the Authority about the efforts and commitments of the Raiders to include a diverse group of contractors, labor, and other vendors as part of the construction of the stadium and its operation once open for business in 2020.

A number of local business leaders have been nominated for the committee and on today’s agenda was an agenda item to nominate and vote on a chairperson. Before the meeting, sources told Las Vegas Raiders Report a good portion of the Board was opposed to their own member Ken Evans being chosen for the role. The issue seems to be a potential conflict of interest based on the fact Evans is already a sitting member of the main Authority board.

Board member Tommy White, Business Manager of the Laborers Local 872, nominated contractor Sean Stewart based on his experience in both the construction field and his work with minority contractors, women owned businesses, and others. Jan Jones-Blackhurst seconded the motion for Stewart’s nomination. In the discussion phase, Evans spoke of his desire for the role – in essence nominating himself for Chairman role – and why he was the best fit. After a second on the motion, Chairman Steve Hill moved to table the discussion as there was clearly not a consensus amongst his fellow members.

White, after the meeting’s conclusion, talked with the Las Vegas Raiders Report (see video) and reiterated why he supported Stewart over Evans.

Expect the vote on the position to happen at the Board’s February meeting.