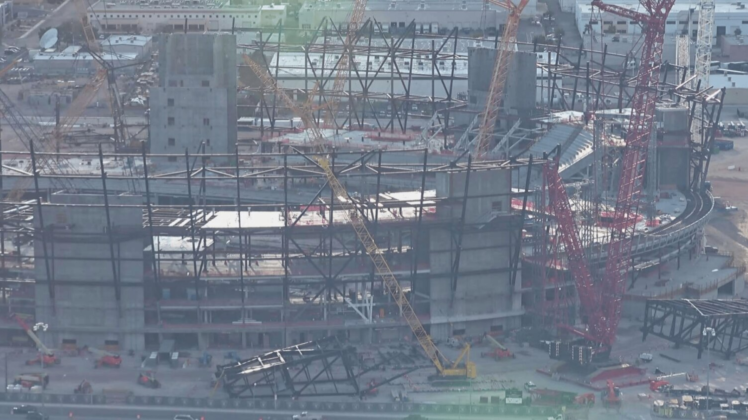 A February construction update incorrectly listed August 4, 2020, as the stadium completion date and August 6, 2020, as the Raiders first game in the facility. Both are incorrect.

Making it great fodder for conspiracy theorists and stadium detractors, a subcontractor incorrectly listed completion dates for the Las Vegas Stadium which was clarified during today’s Las Vegas Stadium Authority Board meeting today.

Don Webb, who oversees the construction project for the Raiders, clarified the mistake unaware of how it happened.

“We don’t even know our schedule (NFL game schedule) for next season much less than the 2020 season,” Webb joked. “So both of those are absolutely wrong. I’m here to say without any uncertainty that we’ll finish on July 31, not Aug. 4 and I’m fairly certain our first game won’t be on Aug. 6.”

Webb reassured the board at its regular meeting today the date of substantial completion is unchanged: July 31, 2020.

Revenues for January were above projected amounts and annual collections are on target.

The snafu created a flurry of incorrect media reports from national media outlets including Pro Football Talk. Webb made it clear during the meeting nothing about the completion date has changed.

“I was mystified when I found out they had said that because I’m quite familiar with the schedule,” Webb told the Board. “I sign off on any changes to that schedule, and the schedule still shows that we’ll have substantial completion on July 31 (2020).”

The one true report was about delayed delivery of some of the steel components to the site. Although it has no bearing on the construction schedule or delivery date, it will undoubtedly fuel speculation about a delay.

Because the stadium is using a design and build format, the team will just move to other areas of the project as the schedule can be fluid and often schedule changes to occur based on a variety of issues. The delayed steel consists of 40-foot L-trusses what will be used for the stadium’s roof and will be placed by what Webb called super cranes. Those will help place the roof and also are said to speed up steel work throughout the project.

Applied Analysis’ Jeremy Aguero updated the Board on the hotel tax revenue which is being used to fund the public portion of the project. Through January, the rolling total shows the tax just above projections at $93,909, 848. That’s officially .06% above projections.

Estimated projections for January indicate .03% above forecast with just about $4.8 million in tax revenue collected. That slightly above projected January revenue kept the annual revenue right at the projection for the tax.