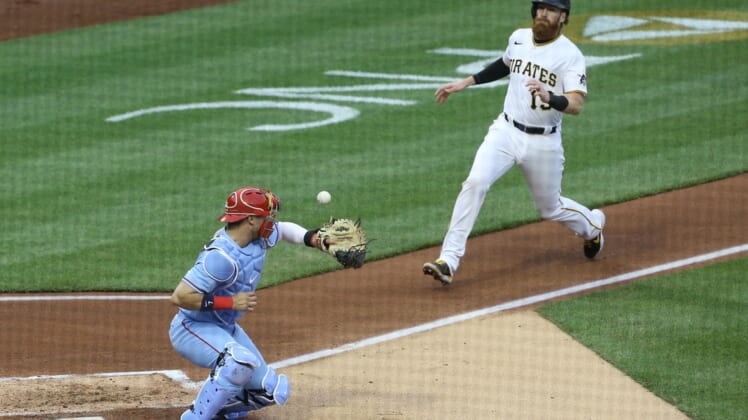 Bryan Reynolds hit an RBI double, Colin Moran had a pair of RBI singles and Gregory Polanco an RBI base hit for Pittsburgh, which has dropped three in a row.

Tommy Edman led off the game with a double. An out later, Paul Goldschmidt knocked in Edman with a single. After Arenado walked, DeJong hit his sixth homer, to left-center, for a 4-0 Cardinals lead.

In the second, Pittsburgh loaded the bases with no one out but scored just once.

Moran singled and went to third on Polanco’s double. Kevin Newman walked to load them up. Ka’ai Tom’s sacrifice fly brought home Moran, making it 4-1, before Flaherty got Michael Perez to ground out and struck out Cahill.

St. Louis added another in the third. Goldschmidt walked and Arenado pushed him to third with a single. After DeJong lined out, Tyler O’Neill’s base hit drove in Goldschmidt for a 5-1 lead.

The Pirates cut it to 5-3 in the bottom of the third. Phillip Evans drew a one-out walk and went to third on Reynolds’ single. Moran’s single brought in Evans, and Polanco followed with an infield single to score Reynolds.

In the seventh, Dylan Carlson walked and Goldschmidt singled, chasing Pittsburgh reliever Sam Howard. Replacement Duane Underwood Jr. gave up a two-run double to Arenado to boost it to 7-3.

In the bottom of the seventh, Adam Frazier doubled, Reynolds hit an RBI double and Moran followed with an RBI single to close it to 7-5.

The Cardinals added five in the ninth, highlighted by Williams’ homer.