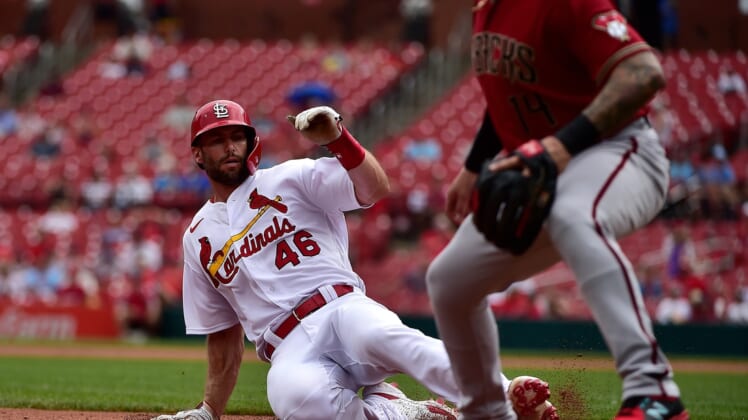 Pitcher Kwang Hyun Kim had a two-run double and also earned the victory Wednesday as the St. Louis Cardinals defeated the visiting Arizona Diamondbacks 7-4 to complete a three-game sweep.

Kim (2-5) allowed one run on three hits over five innings with three walks and five strikeouts. Alex Reyes pitched a scoreless ninth inning for his 20th save in 20 opportunities.

Tyler O’Neill and Paul Goldschmidt each had two doubles among their three hits as the Cardinals won for the fourth time in five games.

Riley Smith (1-4) allowed four runs on seven hits in three innings for the Diamondbacks, who finished June with a 3-24 record. Arizona had 17-game losing streak during the month.

Kim gave himself a 2-0 lead with his second-inning double. Yadier Molina hit a one-out single, Edmundo Sosa hit a two-out single and Kim drove them home with his line drive to left field.

The Diamondbacks cut their deficit to 2-1 in the third inning. Josh Rojas singled and Tim Locastro was hit by a pitch. Kim retired the next two batters before Asdrubal Cabrera brought home a run on a single.

The Cardinals countered in their half of the third. Goldschmidt led off with a double, advanced on a fly ball and scored on O’Neill’s single through the pulled-in infield. O’Neill stole second base, moved to third on a throwing error and scored on a Molina single to make it 4-1.

The Cardinals increased the lead to 5-1 in the fourth. Sosa reached on a catcher’s interference call, advanced to second base on a bunt, and scored on Goldschmidt’ single.

In the fifth inning, O’Neill doubled and scored on Tommy Edman’s single to give the Cardinals a 6-1 lead. They tacked on a run in the seventh inning when O’Neill hit another double and scored on Edman’s fielder’s choice grounder.

The Diamondbacks cut the lead to 7-4 in the eighth inning on a bases-loaded walk by Daulton Varsho, a wild pitch that scored Josh Reddick and David Peralta’s RBI ground out against relievers Roel Ramirez and Ryan Helsley.