St. Louis Cardinals put No. 57 in use for first time since Darryl Kile’s death 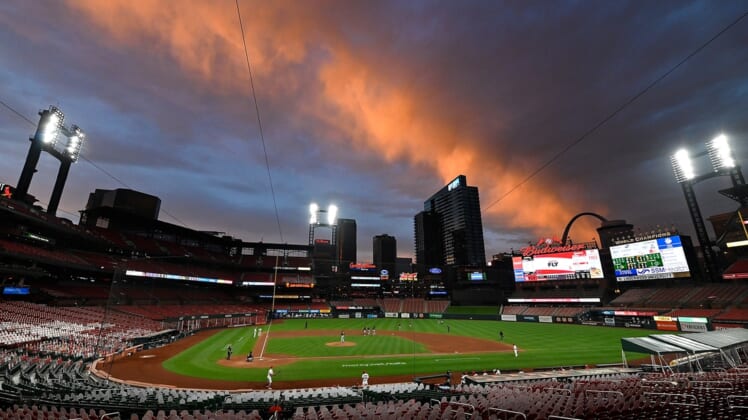 Aug 27, 2020; St. Louis, Missouri, USA; A view of Busch Stadium as the sunsets during the sixth inning of a game between the St. Louis Cardinals and the Pittsburgh Pirates. Mandatory Credit: Jeff Curry-USA TODAY Sports

St. Louis Cardinals pitcher Darryl Kile was 33 years old when he was found dead in his hotel room during a road trip to play the Chicago Cubs.

Now, for the first time since Kile’s death in 2002, the Cardinals have put the pitcher’s old No. 57 back in use. The number was assigned to pitching prospect Zack Thompson as he reported to spring training at the team’s complex in Jupiter, Fla.

“The significance of what Darryl Kile means to this organization is still very real,” John Mozeliak, president of baseball operations, said in comments published by the St. Louis Post-Dispatch on Thursday night. “To me, it’s almost full circle. I think it’s nice that it doesn’t lay in this awkward spot of not used, not retired, and when people get to wear that now they’ll get to reflect on the legacy of Darryl Kile, who he was. I actually think this is a special moment, and that it’s going to be a perpetual moment.”

Kile died from a blockage of the arteries supplying the heart, Cook County’s coroner said at the time. Kile’s coronary atherosclerosis is better known as hardening of the arteries.

Thompson, 23, was only four years old when Kile died. He said he turned to Google to learn more about the significance of No. 57 when the Cardinals’ clubhouse manager texted to tell him he would wear it.

“If they want me to represent that number,” Thompson said, “I’ll respect it and try.”

Thompson was the Cardinals’ first-round draft pick (No. 19 overall) in 2019. He could start the season in the minor leagues but will have No. 57 waiting for him whenever he gets the call to the big leagues.

The left-hander put on his jersey for the first time this week. He will wear it again for a bullpen session Friday.