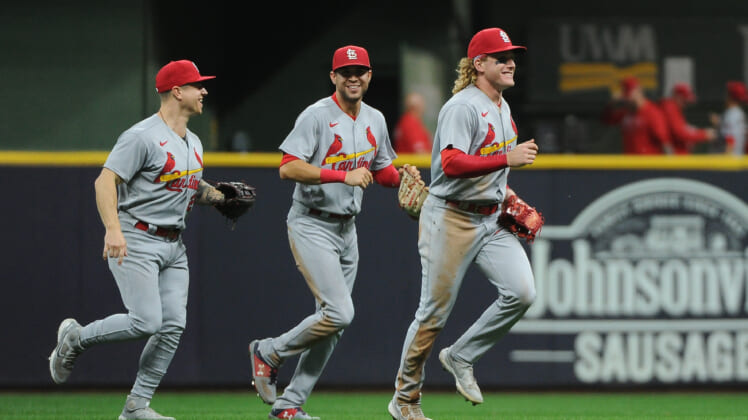 Offensive shortcomings have plagued the St. Louis Cardinals in recent memory. Their fortunes began to change a bit last season, as the Cardinals made a successful second-half push for the second National League Wild Card seed.

The team’s starting outfield (Tyler O’Neill, Dylan Carlson and Harrison Bader) played a role in that push. This season, though, the aforementioned players have slumped out of the gate. For the Cardinals to contend for the National League pennant, they need more from their outfield rotation.

Here’s why the Cardinals’ outfield makes or breaks their pennant aspirations.

Last season, O’Neill and Carlson raked. O’Neill had a breakout season, slugging at a high level and serving as a prominent source of offense. Carlson found success in his first extensive MLB playing time, getting on base and logging extra-base hits at a plausible rate. Bader had his best all-around offensive season.

While he has driven in a considerable amount of runs, O’Neill is struggling mightily to get on base and striking out too much this season. Carlson has been unable to build on his 2021 campaign, struggling to generate offense.

While his play hasn’t been alarming, Bader is off to a monotonous start. Lars Nootbaar getting sent to Triple A and free agent signee Corey Dickerson hitting .185 adds fuel to the fire.

Now, the Cardinals could have something brewing with 24-year-old outfielder Juan Yepez, who has flaunted a great deal of power since making his MLB debut on May 4. With that said, the Cardinals can’t objectively bank on Yepez continuing to hit at a high level in his rookie season.

It appeared this group turned a corner last season. Thus far this season, it has severely lacked and is holding the Cardinals back. Manager Oliver Marmol needs O’Neill to keep driving in runs but also work the count more. Carlson consistently getting on base will go a long way. Bader generating more line-drive contact will do the same.

As previously alluded to, the Cardinals’ offense has traditionally lacked in productivity in each of the last four seasons. The irony of the entire situation is their lineup has been one of the better units in the sport this season. Their outfield mix is preventing it from being elite.

It was only a matter of time before Paul Goldschmidt and Nolan Arenado concurrently played like their All-Star selves. Now they are. The pair of corner infielders are playing at a high level, generating offense with ease and seldom striking out. Tommy Edman is slapping base hits from both sides of the plate.

Albert Pujols and catchers Yadier Molina and Andrew Knizner have had their moments in the batter’s box. Essentially in place of Paul DeJong, a staple at shortstop for the Cardinals over the last three years who was recently sent to Triple A, Brendan Donovan is off to an auspicious start.

If the Cardinals combined the good of this season with the good of last season, they’d have an overwhelming offensive attack. They’d be stable and capable behind the plate, have an excellent infield and a firing outfield. It would be a combination of players who get on base, heavy swingers who drive in runners and a healthy balance of veterans and youth.

O’Neill and Carlson have showcased the ability to produce on an everyday basis. If they get back to doing as such, the Cardinals’ offense can finally play up to its collective billing.

Starting pitching remains the Cardinals’ identity. If the season ended tomorrow, Miles Mikolas would be a finalist for the NL Cy Young Award. The right-hander is inducing weak contact, providing length and owns a 1.68 ERA. Adam Wainwright is having another stupendous season, pushing Father Time to the side.

Dakota Hudson is evading trouble and keeping the Cardinals in games. Jordan Hicks has held his own as a starter. The general success of this rotation comes with their ace, Jack Flaherty, yet to make his season debut due to a shoulder injury and Steven Matz off to a nightmare start. 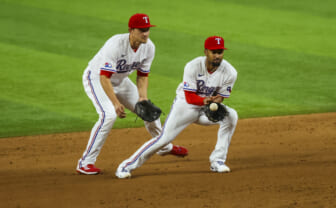 Sure, the Cardinals’ bullpen has been shaky. At the same time, most aspects of this club are either off to an encouraging start or at least holding down the fort. Their starting rotation hasn’t been perfect, but they’re doing what they can without their ace.

St. Louis is a respectable 20-18. That said, if the Cardinals are going to challenge the Milwaukee Brewers for the NL Central and get past the NL Wild Card Round altogether, they need more oomph. This team has never clicked at the same time. More often than not, their rotation has led the charge with the offense and bullpen slacking. So far this season, the rotation has been reputable, the bullpen has stayed the course and the offense has been feast or famine.

No matter the way the season began, the Cardinals have found a way to squeak into the playoffs in each of the last three seasons. To do something with that opportunity, though, their offense has to be resolute. That starts and ends with their outfield mix.