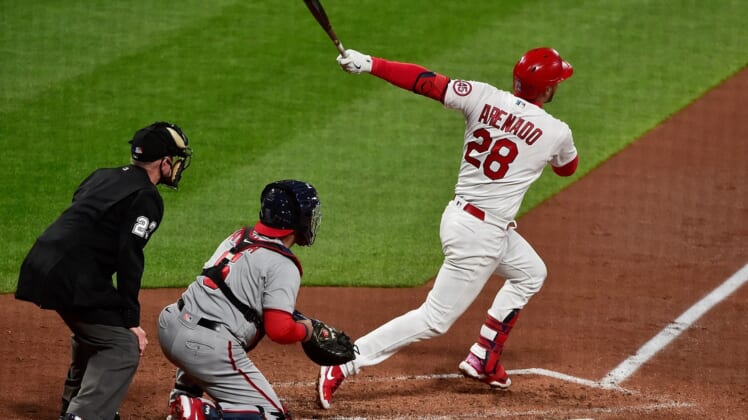 Goldschmidt hit a homer, the 250th of his career, and a two-run single, as the Cardinals won in convincing fashion.

All nine Cardinals starters, including pitcher Jack Flaherty, hit safely in the game.

Flaherty (2-0) allowed one run on three hits in five innings. He struck out six hitters.

Reliever Luis Avilan followed Strasburg and allowed six runs, three of them earned, on six hits and two walks in his one inning.

Goldschmidt got the Cardinals started with his first-inning homer.

The Nationals struck back in the third inning. Flaherty hit Victor Robles with a pitch and Juan Soto drove him home with a double off the right-field wall.

The Cardinals surged ahead 5-1 in the bottom of the inning. Tommy Edman reached on a lead-off single and Arenado hit his two-run homer.

The Cardinals chased Strasburg while scoring nine times in the fifth inning.

Carpenter reached on Starlin Castro’s error leading off the fifth inning, then Dylan Carlson walked and Andrew Knizner hit a single to load the bases.

Josh Harrison’s two-run double in the ninth capped the scoring.