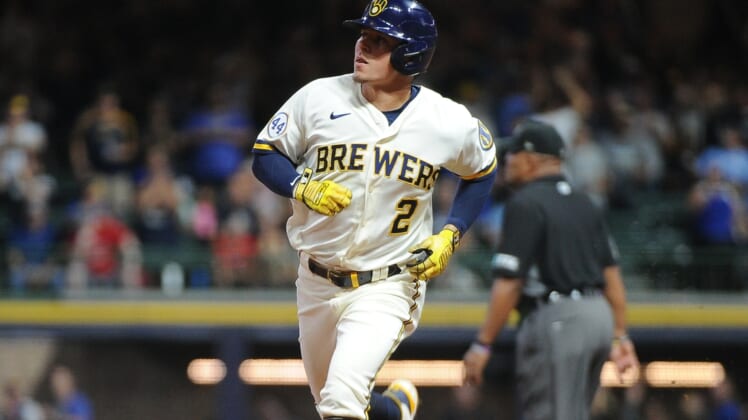 Jon Lester allowed two runs in six innings for his 200th career victory as the surging St. Louis Cardinals extended their winning streak to nine with a 5-2 victory over the host Milwaukee Brewers on Monday night.

By winning the opener of the four-game series, the Cardinals (80-69) retained at least a three-game lead for the second National League wild-card spot. Milwaukee (91-59) leads St. Louis by 10 1/2 in the NL Central, but the Brewers’ magic number remained at three for clinching the division.

Milwaukee, which lost for the fourth time in six games needs to win two of the three remaining games to clinch the title during the current series.

Lester (7-6) yielded a pair of solo homers in the second inning and just another single. He struck out two and walked none, improving to 4-1 in 10 starts with St. Louis since being acquired from the Washington Nationals at the trade deadline.

Kodi Whitley, T.J. McFarland and Luis Garcia each followed by tossing one scoreless inning, with Garcia recording his first save.

Nolan Arenado hit a two-run homer in the first, his 33rd long ball of the season, and Yadier Molina had a pair of RBIs singles for St. Louis.

Milwaukee starter Freddy Peralta (9-5) gave up three runs on seven hits in six innings. He struck out nine and walked one.

Molina’s RBI single put St. Louis up 3-2 in the sixth. Tyler O’Neill walked to open the inning, and Nolan Arenado punched a single to shallow right. Molina’s one-out single through the left side scored O’Neill.

St. Louis added a run in the seventh when Matt Carpenter opened with a pinch-hit double, advanced on a groundout and came home on Paul Goldschmidt’s sacrifice fly.

Molina added a run-scoring single in the eighth.

The Brewers erased a 2-0 deficit in the second. Avisail Garcia, who missed the past four games due to back issues, led off with his 28th homer. After Christian Yelich popped out, Luis Urias tied it with his 21st homer.