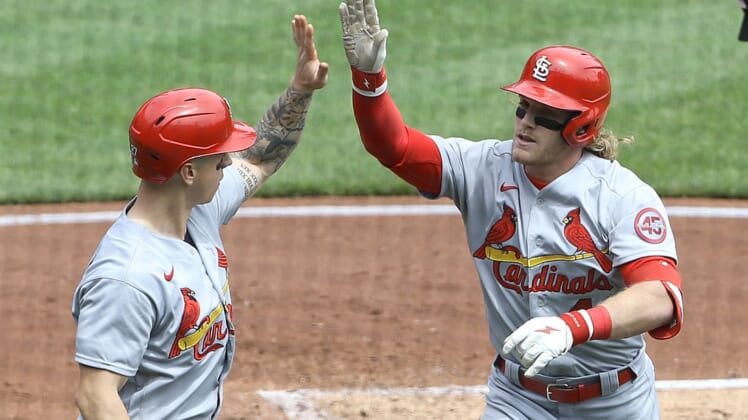 Martinez (2-4), in his longest outing of the year, gave up five hits and two walks and posted three strikeouts. Alex Reyes pitched a perfect ninth for his seventh save.

It was the Cardinals’ third series sweep.

It was the lowest scoring game of the three between the clubs in the series. They combined for 27 runs in the first two.

Pittsburgh lost its first series since a three-game sweep at Cincinnati from April 5-7.

Crowe also led off the bottom of the third with a single to left on the first pitch he saw as a batter in the major leagues. And in the bottom of the fifth, even though he was going to exit the game after throwing 97 pitches, he went to the plate and drew a leadoff walk.

Pittsburgh catcher Jacob Stallings got a scare in the fourth when he got hit in the face by a Martinez pitch. He received medical attention, but it turned out it was more of a glancing blow and Stallings was able to remain in the game.

Bader made his season debut in the series opener Friday after being out all year because of a forearm injury.

In his first two games against Pittsburgh, he was 0-for-8 with three strikeouts, a walk and a stolen base.

The rust apparently was gone by Sunday.

In the second, Paul DeJong led off with a walk. Tyler O’Neill’s single pushed DeJong to second. Andrew Knizner hit into a fielder’s choice, with DeJong out at third.

Bader followed with a homer to left-center for a 3-0 St. Louis lead.

Pittsburgh had at least one runner in each of the first six innings but could not bring anyone home.