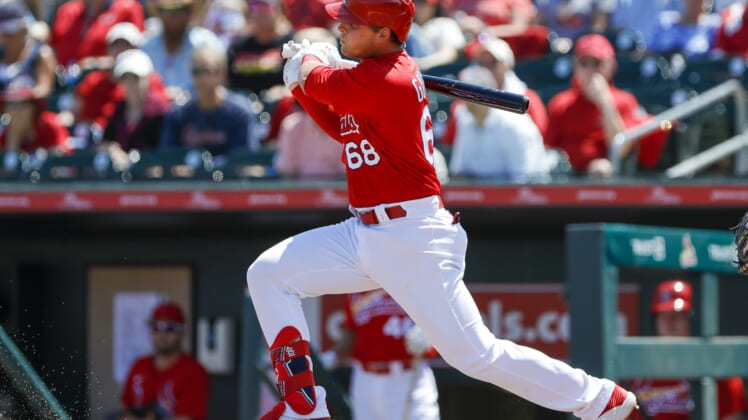 The St. Louis Cardinals at 20-18, are doing fine when compared to last season. But they’re still in second place behind the Milwaukee Brewers in the NL Central.

Not to worry, because they’re about to get some major reinforcements by the names of Nolan Gorman and Matthew Liberatore, courtesy of their minor-league affiliates.

Down below we break down what each of the club’s top prospects can immediately offer the Cards in 2022.

What Nolan Gorman brings to the Cardinals

Who is Nolan Gorman? Many Cards fans likely are quite familiar with the No. 29 ranked prospect on the MLB top-100 list, but just in case, here goes nothing.

With Gorman being promoted to the majors for his first time at the age of 22, it’s no doubt an exciting time for him and his supporters, but Cards fans should be on the edge of their seats too.

Gorman plays both second and third base, but has since transitioned full time to second after Nolan Arenado’s arrival last season. According to Katie Woo, Gorman is set to make his major league debut on Friday, starting at second.

The 6-foot-1 lefty was drafted in the first round in 2018 thanks to his elite power potential, yet Gorman also has a plus-plus arm which helps him make up for less than ideal fundamentals from a fielding standpoint.

Make no mistake, Gorman is reaching the bigs due to his bat, not his glove. But after getting off to a scalding start with 15 home runs in just 34 games at the Triple-A level, it’s time to see what this kid can do against stiffer competition. The Cards are now ready to give him that chance, so grab your popcorn.

Like Gorman, Matthew Liberatore is another top prospect within the Cardinals’ system. Also a lefty, Liberatore is a starting pitcher who’s set to make his major league debut on Saturday.

Liberatore is also 22 and a former first-round pick, and now he’s the 39th-ranked prospect in all of baseball.

At 6-foot-4, Liberatore takes advantage of his big frame to bring big-time velocity to the plate, routinely reaching 95 or 96 on his fastball. But he also mixes in two breaking balls, with a 12-6 curveball that sits in the upper 70s, while utilizing a slider touching the upper 80s with a good amount of movement. He even has a changeup that helps him change speeds even more to keep hitters guessing in the box.

Although he doesn’t have any one pitch that seriously outranks his others, Liberatore has strong command of all of them and should have no trouble getting hitters out at the next level either.

It’s gonna be an exciting week for Cardinals fans.