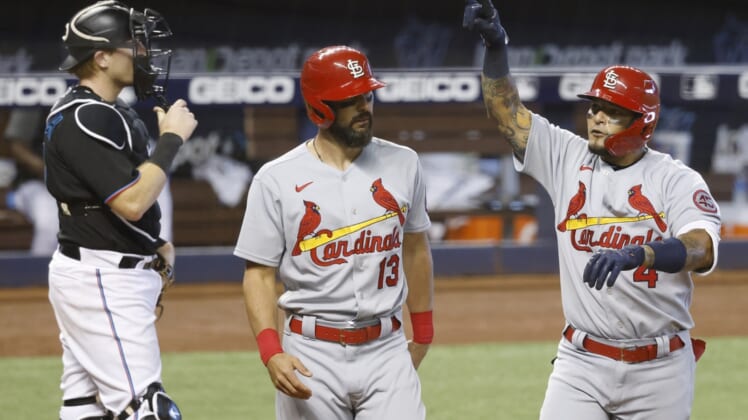 Yadier Molina slugged a go-ahead, two-run homer and Dylan Carlson added a ninth-inning grand slam to lead the St. Louis Cardinals to a 7-0 win over the host Miami Marlins on Wednesday afternoon.

Molina was the star of the series, producing at least one key RBI in each game. He has seven RBIs in six games this season, including five against Miami.

St. Louis held the Marlins to a combined total of 15 hits and three runs in the series.

Dickerson also doubled in Wednesday’s eighth inning. Miami’s other dangerous hitter in this game was Brian Anderson, who blasted two long drives that were caught on the warning track.

Marlins starter Pablo Lopez (0-1) had retired 10 straight batters and was one out away from seven scoreless innings. But he walked Matt Carpenter and gave up Molina’s first homer of the season, and that ended Lopez’s night.

Miami threatened in the first with three baserunners. Dickerson singled, and Starling Marte walked, both with no outs. But Flaherty picked Dickerson off of second, and Miami failed to score.

St. Louis came close in the fourth. Nolan Arenado hit a one-out infield single, advanced to second on a groundout and to third on a Chad Wallach passed ball. But Carpenter struck out on a 2-2 fastball to end the inning.

The Cardinals got on the board in the seventh as Molina pulled a 0-1 cutter to left for his two-run homer.

St. Louis stretched its lead to 3-0 in the eighth as Tommy Edman hit a two-out single, stole second and scored on Paul Goldschmidt’s single.

Carlson’s grand slam in the ninth off reliever Zach Pop made it 7-0. Marlins relievers have now allowed seven homers in six games.

The game ended when Jon Berti, hitting with two runners on base, hit a line drive that was caught on a diving play by Cardinals right fielder Justin Williams.