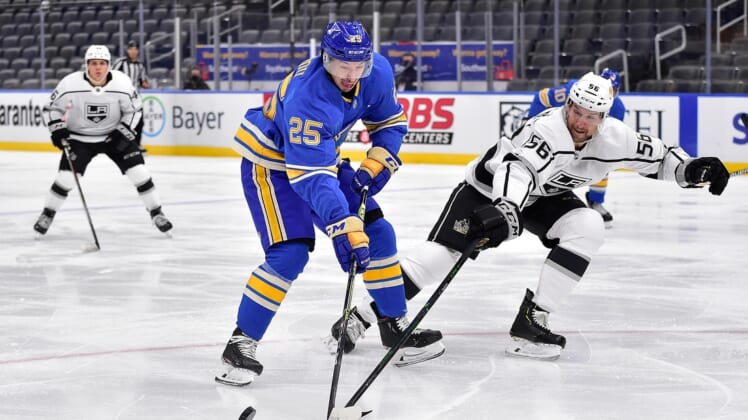 David Perron scored what proved to be the game-winning goal and earned an assist as the St. Louis Blues defeated the visiting Los Angeles Kings 4-2 on Saturday night.

The Blues have earned points in four of their five games this season.

Dustin Brown and Adrian Kempe scored for the Kings and Cal Petersen made 26 saves.

After going 0-for-14 on the power play in their first four games, the Blues converted their first opportunity. Krug took a drop pass from Perron and scored on a long slapshot from straight away with 6:48 left in the first period.

The Blues built a 13-5 shots advantage in the first 20 minutes, but the Kings had a couple of near-misses. Kempe hit the left post with a snapshot off the right wing and Kale Clague hit the crossbar with a fluttering shot.

Then Kempe tied the game 1-1 with a snapshot from atop the left circle just 57 seconds into the second period.

Dunn answered that goal less than two minutes later, moving in from the blue line to take a pass from Thomas and convert a snapshot down the middle.

Perron pushed the Blues’ lead to 3-1 at 7:25 of the period by stealing the puck on the forecheck, then scoring on a give-and-go play with Thomas.

But the Blues took four minor penalties in the period and the Kings cut the lead to 3-2 with a 5-on-3 power play. Anze Kopitar slid a cross-crease pass to Brown near the left post for a point-blank shot.

The Kings got a power-play late in the third period, then they pulled Petersen for a 6-on-5 advantage. But they failed to tie the game with either opportunity, then Schwartz iced the game with an empty-net goal.

The teams will play again in St. Louis on Sunday night.