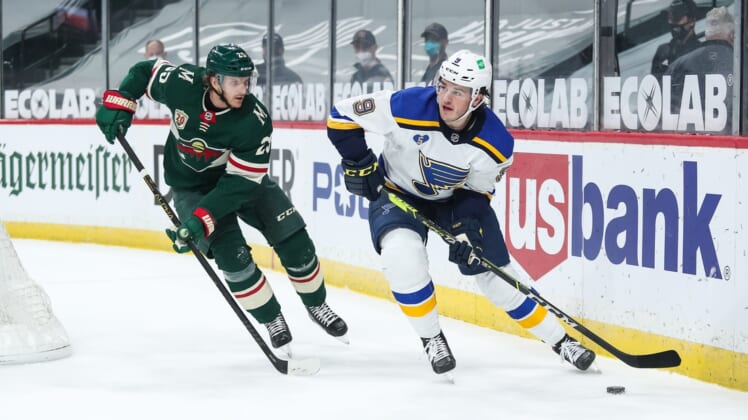 Robert Thomas capped St. Louis’ three-goal third period by scoring the tiebreaker with 23 seconds left in regulation, and the Blues rallied for a stunning 4-3 win over the Minnesota Wild on Wednesday night at Saint Paul, Minn.

Down 3-1 after two periods, St. Louis (22-19-6, 50 points) came out with purpose in the third. Mike Hoffman cut the Minnesota advantage to one with his second power-play goal of the night 3:49 into the third. Then, a wide-open Jordan Kyrou got enough of the puck to push it through the legs of Wild netminder Cam Talbot (28 saves) at the 7:41 mark of the final period.

With the game looking to be headed to overtime, Thomas, who assisted on Kyrou’s goal, pushed to the net, found some space and flipped the puck past Talbot to put the Blues ahead and on their way to a third consecutive victory. St. Louis is trying to hold on to the fourth and final playoff spot in the West Division.

Marcus Foligno had a goal and an assist while Joel Eriksson Ek and Jonas Brodin scored for the Wild (31-14-3, 65 points), who saw their season-high seven-game winning streak end in disheartening fashion. Jordan Greenway added two assists.

St. Louis, which snapped a five-game road skid, owned a 13-10 shots-on-goal advantage in the first period, but Minnesota went into the first intermission up 1-0 thanks to Brodin’s successful blast from the near point with 2:13 left in the opening frame.

Minnesota made 2-0 just 32 seconds into the middle period when Eriksson Ek had no problem pouncing on the rebound of Greenway’s shot and burying it into an open net.

The Blues cut that deficit in half in the early minutes of a second-period power-play chance. Taking a perfect pass from Vladimir Tarasenko, Hoffman put the puck on net and barely through the legs of Talbot at 10:27, giving St. Louis a power-play goal in eight straight contests.

Minnesota, though, regained its two-goal advantage a little over a minute later when Foligno drove the puck through traffic and a screened Binnington for a 3-1 lead.

Wild defenseman Jared Spurgeon played in his 700th NHL game and finished with a plus-1 rating on the night.