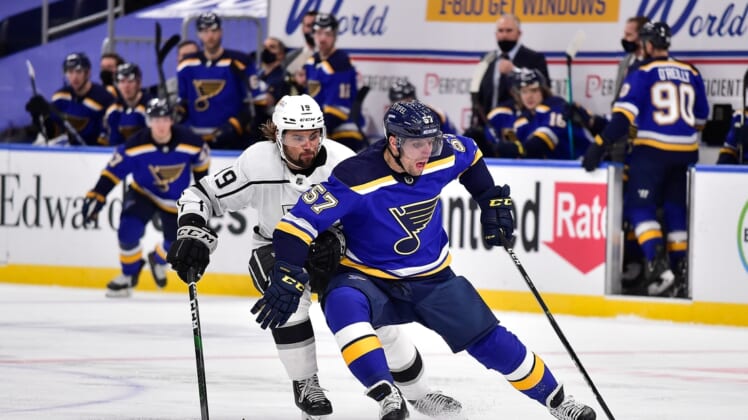 The St. Louis Blues begin a four-game road trip Tuesday night in Las Vegas with the first game of a back-to-back against the West Division-leading Vegas Golden Knights.

If season-opening trends continue for St. Louis, it should be a good night. But Thursday night’s finale might be another story.

The Blues have been consistently inconsistent so far in 2021. In the first game of their three back-to-backs, at Colorado and at home against San Jose and Los Angeles, they’re a perfect 3-0 while outscoring the opposition 13-7 in the process. But the back half of the two-game sets have been a different story. St. Louis is 0-2-1, getting outscored 16-4 including an ugly 6-3 loss to the visiting Kings on Sunday night.

“We have to go out and fix that,” center Brayden Schenn, who had two goals in Sunday’s loss, said. “It’s early and we’ve got a lot of (back-to-backs) left and we’ve got to fix that problem or else we’re going to be a very average .500 hockey club.”

Schenn said playing Vegas, which is tied with Montreal and Toronto with 10 points to lead the NHL, might help keep the Blues more focused.

“Maybe that’s what we need,” Schenn said. “We know it’s going to be a tough two-game series there. They’re a good team. They have a deep group. I think we’re looking forward to the challenge and I think that could be good for our hockey team.”

After watching his team give up five straight goals while falling behind, 5-1, after two periods on Sunday, St. Louis coach Craig Berube wasn’t in any mood to talk about the series with the Golden Knights.

“I’m not focused on Vegas,” Berube said. “I don’t care about Vegas.”

He was more concerned with his team’s lack of effort against a Los Angeles team that it had defeated 4-2 a day earlier.

“We come out in the second period and we just played uninspired hockey more than anything,” Berube said. “Like turning pucks over, and just (playing) loose. And it got away from us.

“Our attitude’s got to be better. We gotta pull together as a team. That’s what it’s all about. We’ve shown it at times and we’ve won hockey games. But again, the consistency is not there. Compete and work and all that. That’s attitude. That’s just all attitude.”

Vegas, meanwhile, will be just happy to play a different team after completing a four-game stretch against Arizona. The Golden Knights bounced back from their lone loss of the season, 5-2 in Glendale, Ariz., on Friday night, with a 1-0 victory on Sunday afternoon. William Karlsson, cutting into the slot, scored the game-winner off a Jonathan Marchessault feed from the behind the net with 42.7 seconds remaining.

“It was a good week, let’s put it that way,” Marchessault said of winning three of four from the Coyotes.

Tuesday night’s contest marks the first meeting between the Blues and Golden Knights since defenseman Alex Pietrangelo, who scored what proved to be the winning goal in Game 7 of the 2019 Stanley Cup Final to give St. Louis its only Cup victory in team history, signed a seven-year, $61.6 million free agent contract with Vegas in October.

“I’ve been joking about if you do it, might as well do it eight times in one year and get it over with,” Pietrangelo said of facing the team that made him the fourth overall pick of the 2008 draft.

St. Louis, which finishes the road trip with a weekend back-to-back at Anaheim, is 5-5-0 all-time against the Golden Knights.