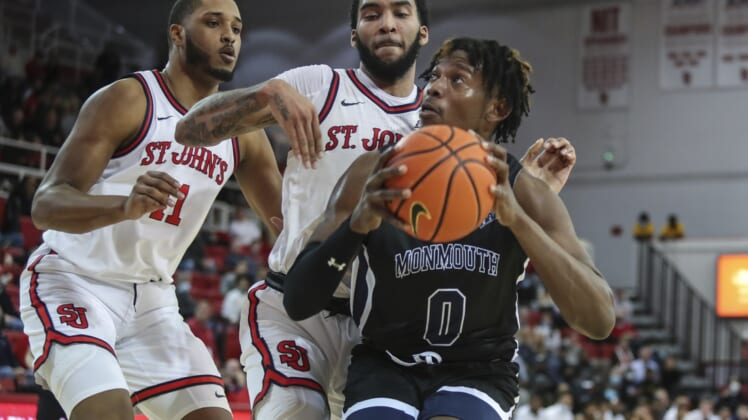 St. John’s held Reynolds to six second-half points as he finished with a career-high-tying 25 points.

Montez Mathis added 14 points and five assists for St. John’s. The Storm also got 13 points from Stef Smith, who lost his starting job two games ago but has remained a key part of the St. John’s rotation. Dylan Addae-Wusu added 11 points and a game-high seven assists. He had three of his points in the final 33 seconds.

Monmouth (7-2), which had its seven-game win streak snapped, was also led by Myles Foster, who had 13 points and eight rebounds off the bench. The Hawks’ Marcus McClary scored 14 points — all of them in the second half.

The Storm, who led by as many as nine points early, went into halftime with a 42-36 advantage. St. John’s lead was mostly a function of its 10-for-12 free-throw performance compared to Monmouth’s 0-for-3.

Monmouth stayed in the game due to the first-half performances of Reynolds (19 points on 5-for-6 3-point shooting) and Foster (12 points, five rebounds, three on the offensive boards).

McClary made a free throw with 18:26 left in the second half to cut St. John’s lead to 42-37, but that was as close as Monmouth got until the final minute.

With 53 seconds left, Mathis fouled Monmouth’s George Papas on a 3-pointer. Papas made all three foul shots, cutting the Hawks’ deficit to 83-81. But that was as close as the Hawks got the rest of the way.

St. John’s clinched the win with a layup and free throw from Addae-Wusu and two Alexander foul shots.