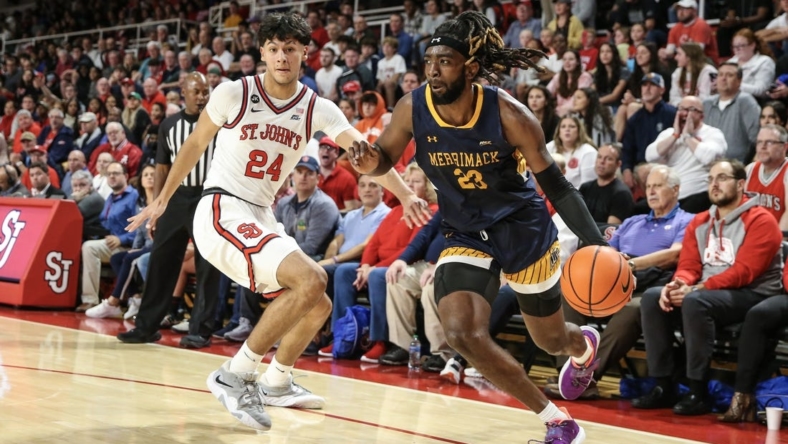 David Jones collected 21 points and 10 rebounds as host St. John’s took control in the opening minutes and cruised to a 97-72 victory over Merrimack on Monday night in New York.

Jones produced a standout debut for the Red Storm after transferring from DePaul. In 24 minutes, Jones made 8 of 16 shots, including five 3-pointers, after shooting 27.3 percent from behind the arc in two seasons with DePaul.

Montez Mathis added 16 points for the Red Storm, who dominated their first meeting with Merrimack by leading for 37:52, scoring 46 points in the paint and converting 18 layups and dunks.

Posh Alexander added 14 points, six steals and five assists while Andre Curbelo contributed 13 points and seven assists in his debut after transferring from Illinois. The backcourt duo combined for eight of St. John’s 14 steals and 12 of its 22 assists.

Jones hit three 3-pointers to give St. John’s a 65-38 lead less than four minutes into the second half, but Merrimack got within 71-56 on two free throws by Derkack with 8:34 left.

St. John’s finished it off with a 16-2 run highlighted by Jones’ fifth 3-pointer to extend its lead to 87-58 with 5:02 left following a layup by Alexander.