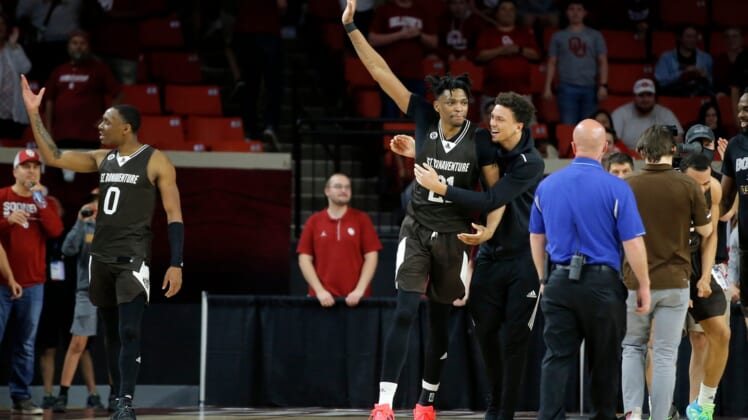 Two teams that underachieved during the regular season will have a chance to salvage their 2021-22 campaigns with a trip to New York for the NIT semifinals when St. Bonaventure (22-9) visits Virginia (21-13) on Tuesday in a quarterfinal game in Charlottesville, Va.

The Bonnies were ranked 23rd in the Associated Press preseason poll, with the Cavaliers two spots behind. But not only did neither team make the NCAA Tournament, each was seeded in the lower portion of the NIT bracket and had to win on the road in the second round to even get this far.

“This win says a lot about our guys,” 15th-year St. Bonaventure coach Mark Schmidt said about his team after a 70-68 win at Oklahoma on Sunday. “Our guys showed some great mental and physical toughness. I’m just really proud of the way we played.”

“It’s been a tough road this season,” Holmes said afterward. “It’s emotional for me. It’s our senior year. Being able to do this with these guys is special.”

To get to New York, the Bonnies, who won at Colorado in the first round, will have to win on the road for a third consecutive time against a Power Five school.

Virginia edged second-seeded North Texas, 71-69 in overtime, also on Sunday. The Cavaliers previously beat Mississippi State 60-57 at home in the opening round. The higher-seeded Bulldogs were unable to host because of planned arena construction.

“It’s good to be in this position, to be in this setting and to have to grow and learn from it,” Virginia coach Tony Bennett said. “And, of course, you advance and you’re thankful for that. But every game (the intensity) goes up, and you’ve got to tighten the screws with a level of soundness.”

Virginia’s famed “pack-line” defense has fallen off a bit this season. The Cavaliers finished only eighth in the ACC at defending the 3-pointer, allowing opponents to shoot 33.8 percent.

The Bonnies only shoot 33.2 percent from long distance, but they have been hot from beyond the arc in the NIT, shooting 20 for 39 (51.3 percent) against the Buffaloes and Sooners.

St. Bonaventure could have tired legs playing on the road twice in three days. The five senior starters played 194 of a possible 200 minutes Sunday at Oklahoma, scoring all but two points for the team.