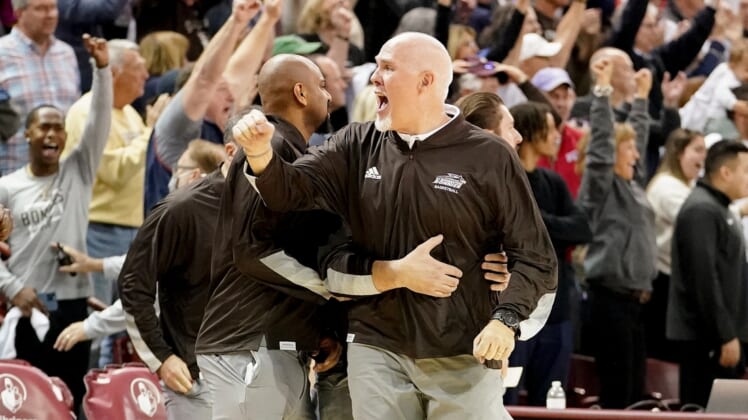 Kyle Lofton made two free three throws with 5.3 seconds left to put St. Bonaventure ahead and Osun Osunniyi preserved the lead by blocking a shot as time expired to knock off Virginia, 52-51, in an NIT quarterfinal in Charlottesville, Va. on Tuesday night.

The Bonnies rallied from a five-point deficit in the final two minutes and Jaren Holmes, Osunniyi and Dominick Welch each scored 10 points for St. Bonaventure (23-9), which advanced to the NIT semifinals for the first time since it won the event in 1977.

Armaan Franklin scored 17 points and Jayden Gardner had 14 for Virginia (21-14), which fell short of its first NIT semifinal berth since 1992.

Gardner missed the front end of a one-and-one with 18 seconds left, giving the Bonnies another chance. After Holmes’ clutch foul shots, Kihei Clark drove to the basket but had his shot rejected by Osunniyi, who entered 11th in the nation with 2.87 blocks per game. He had four blocked shots Tuesday.

Welch also had 10 rebounds for the winners. Clark and Reece Beekman each had six assists for the Cavaliers.

St. Bonaventure led 45-42 after Jalen Adaway drained a deep 3-pointer with 4:36 left in the game. But the Cavaliers scored on their next three offensive possessions. Beekman scored on a driving layup to cut the deficit to one, and back-to-back triples by Franklin put Virginia ahead 50-45 with 2:59 to go, leading to a Bonnies timeout.

Holmes made two foul shots with 1:49 left to cut St. Bonaventure’s deficit to 50-47. Later, an offensive foul on a moving screen by Osunniyi negated what could have been a tying 3-pointer by Welch.

Virginia used a 15-4 run early in the second half to take a 32-27 lead. Gardner had eight points during the spurt. But the Bonnies responded and tied the score at 40 on Welch’s 3 with 7:05 left.