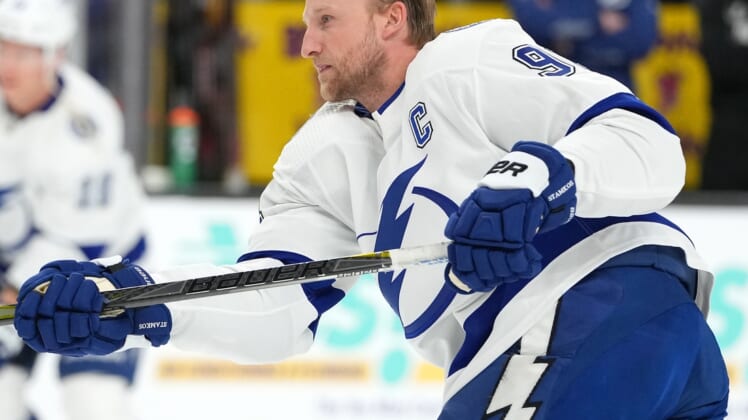 It is rare when Tampa Bay Lightning coach Jon Cooper uses the words that the opponent was “better than us.”

Following Saturday’s 5-2 loss to Boston, Cooper referred to the visiting Bruins in that regard, and the Lightning hope to avoid comments such as those Monday night when they visit the New Jersey Devils in Newark, N.J., for the first time in two years.

“They were better than us tonight,” Cooper said. “We were off a bit, and they capitalized.”

“Some tough breaks for us, but we weren’t hard enough in our end,” Cooper added. “This wasn’t us.”

Tampa Bay is 9-4-1 in its past 14 games, although it is 2-3-1 in its past six following a 9-1-0 tear. Three of those losses are by wide margins with a 9-3 loss to the Florida Panthers on Dec. 30, a 4-0 road loss to the New York Rangers on Jan. 2, and Saturday’s showing when the Lightning trailed by four goals before Ondrej Palat and Brayden Point scored.

Heading into its first trip to New Jersey since Jan. 12, 2020, Tampa Bay is looking to avoid consecutive regulation losses for the first time this season. In the aftermath of the 4-0 loss to the Rangers, they responded with a 7-2 win over the Columbus Blue Jackets and a 4-1 rout of the Calgary Flames by taking control of those games early.

“I didn’t think we played poorly in the first when we were down, but we just lacked some of the touch around the net,” Lightning captain Steven Stamkos said after he took one shot on goal and went scoreless for the fourth straight game.

Tampa Bay played its second game since Nikita Kucherov returned from missing nearly three months with a lower-body injury but could be without Ryan McDonagh. The defenseman took a puck to the right leg on Thursday and is listed as day-to-day after sitting out Saturday.

New Jersey is seeking its second win over Tampa Bay this season after scoring four times in the third period of a 5-3 win in St. Petersburg, Fla. on Nov. 20. The Devils are 4-2-0 in their past six games since a six-game losing streak.

Jack Hughes missed the first meeting recovering from a shoulder injury but has seven of his nine goals since returning on Nov. 30. He also has four goals in his past six games to go along with eight assists but was held off the scoresheet Saturday in a 4-3 loss at Columbus.

The new combinations were a result of Nathan Bastian and Jesper Bratt entering the COVID-19 protocol. They joined Yegor Sharangovich, Pavel Zacha and Andreas Johnsson and Dougie Hamilton, who also has a broken jaw.

It is unlikely that any of New Jersey’s players in the protocol will return Monday, and the Devils also cannot recall top prospect Alexander Holtz, who was placed in the protocol after being sent down recently.