Spurs tighten up play-in chase with victory over Pelicans 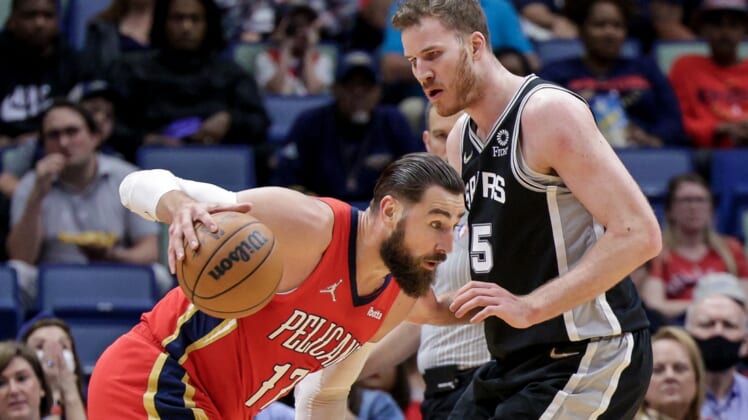 Murray finished with 15 points, 13 assists and 11 rebounds and Jakob Poeltl added 12 points and 11 rebounds as the Spurs (30-44) pulled within one game of the Pelicans (31-43) for the final play-in spot in the Western Conference.

The lead changed hands four times early in the fourth quarter before Landale scored eight points during a 12-0 run that gave the Spurs a 102-92 lead midway through the period.

New Orleans climbed within two points on McCollum’s basket with 41.2 seconds left. After two Spurs’ misses, Alvarado missed a 3-pointer with 4.2 seconds left and Johnson got loose for a layup that completed the scoring with less than a second remaining.

The lead changed hands 12 times and the score was tied seven times in the period, which ended with the score knotted at 84.

McCollum scored all 12 of his first-quarter points during a three-minute-plus stretch and the Pelicans took a 32-22 lead at the end of the period. New Orleans made 4 of 11 3-pointers and San Antonio missed all five of its 3-point attempts.

The Pelicans’ Larry Nance Jr. made a tip-in to start the second-quarter scoring and give his team the first of two 12-point leads early in the period.

McCollum answered with a basket and the lead changed hands twice more in the quarter. The last change came when Johnson beat the buzzer with a tip-in that gave San Antonio a 58-57 halftime lead.