Spurs tighten grip on playoff spot with win over Blazers 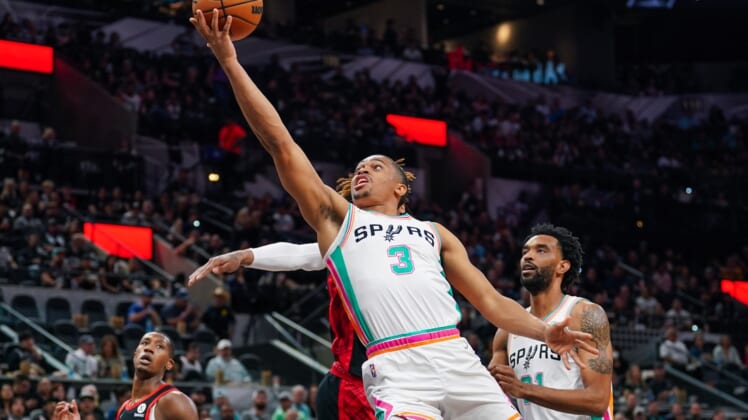 Devin Vassell scored 22 points and Keldon Johnson added 21 to lead a balanced San Antonio attack as the Spurs produced a huge first half and rolled past the visiting Portland Trail Blazers 130-111 on Friday.

The Spurs (32-45) held on to the 10th spot in the West and the final position for the play-in tournament. San Antonio, who could finish as high as ninth in the West, owns the tiebreaker over the Los Angeles Lakers via a better conference record.

Portland (27-50) was eliminated from postseason consideration with the loss, which was its sixth straight defeat and its 16th in its past 18 outings.

The teams play each other again on Sunday in the Alamo City.

Zach Collins poured in 15 points for San Antonio, with Joshua Primo and Jakob Poeltl hitting for 13 each, and Josh Richardson and Lonnie Walker IV scoring 12 apiece in the win. The Spurs played without all-star point guard Dejounte Murray, who was out due to an upper respiratory illness.

San Antonio trailed by as many as eight points in the early minutes of the game but leapfrogged to the front in the middle of the first quarter, eventually taking a 34-24 lead before settling for a 34-29 edge at the end of the period.

The Spurs took control of the game early in the second quarter with a 12-2 run and pushed their advantage to 77-49 at the break.

San Antonio had four players in double-figure scoring in the first half, led by Richardson’s 12 off the bench and 11 by Johnson. Keljin Blevins paced the Trail Blazers with 10 points in the half.

San Antonio’s advantage grew to 31 points after a 3-pointer by Primo with 8:26 to play in the third quarter. The Trail Blazers clawed back to within 101-81 at the end of the period, but the Spurs’ lead was too much to overcome.