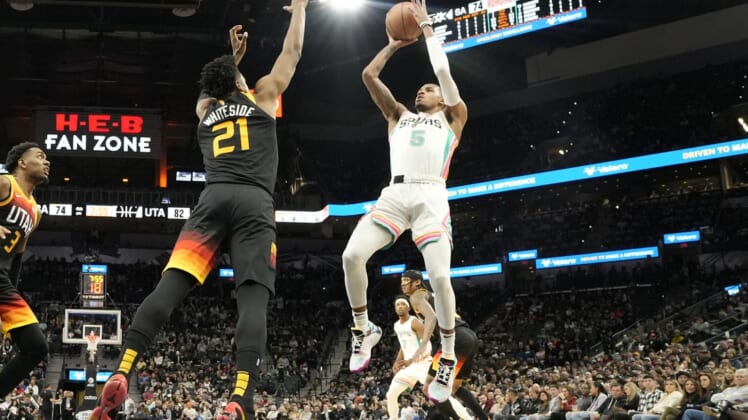 The San Antonio Spurs began their seven-game homestand with two goals — get coach Gregg Popovich on top of the NBA’s all-time coaching ranks and make headway in their chase for a playoff spot.

The Spurs accomplished the first goal on Friday but are treading water on the second, losing three of the first five games on this home stint, which will continue with a visit from the struggling Oklahoma City Thunder on Wednesday night.

The Spurs, who have lost two straight games and seven of their past nine, are running out of time to make a charge toward the postseason. San Antonio is in 12th place in the Western Conference, two spots out of the play-in tournament with only 13 games remaining.

The Spurs’ latest setback was a 149-139 loss at home to surging Minnesota on Monday in which Timberwolves center Karl-Anthony Towns scored a career-high 60 points, the most by a player in the NBA this season.

San Antonio countered with a career-best 34 points from Keldon Johnson, 30 points and 12 assists from Dejounte Murray and three other players in double-figure scoring but still couldn’t match the firepower from Towns and Minnesota.

“If you don’t play good enough defense, you lose by one or by 10, it doesn’t matter,” Popovich said afterward. “We didn’t come up with anything to slow Minnesota. We had a hard time with them for sure. I loved the guys’ effort, their aggressiveness. They played through everything, didn’t get down and continued to work.”

Murray’s totals in the loss allowed him to become the first player in Spurs history to have a season with at least 1,000 points, 500 assists and 500 rebounds.

“‘I don’t care, because we lost’ — that’s the mentality that I live with,” Murray said. “I don’t care if I played the best game of my career. If we lost, it doesn’t mean nothing. Nobody’s going to talk about losers. You only talk about the winners.”

The only team in the West that’s suffered through a worse streak than San Antonio is the Thunder, who have dropped six straight games, including 134-116 at home to Charlotte on Monday.

“We certainly needed to be better defensively, but I thought it was a really good offensive night for us,” Thunder coach Mark Daigneault said afterward. “The ball really moved before advantages, after advantages, and everybody was a participant. We got really quality shots.”

Gilgeous-Alexander scored at least 30 points for the eighth time in Oklahoma City’s past 10 games while Krejci’s output was his career high.

“We’re the youngest team in the league and banged up on top of that,” Daigneault said. “We’re trying to win games. Our guys are competing hard.”

Wednesday’s contest will be the first of a three-game trip for Oklahoma City, which will travel to Florida for games against Miami and Orlando upon leaving the Alamo City.