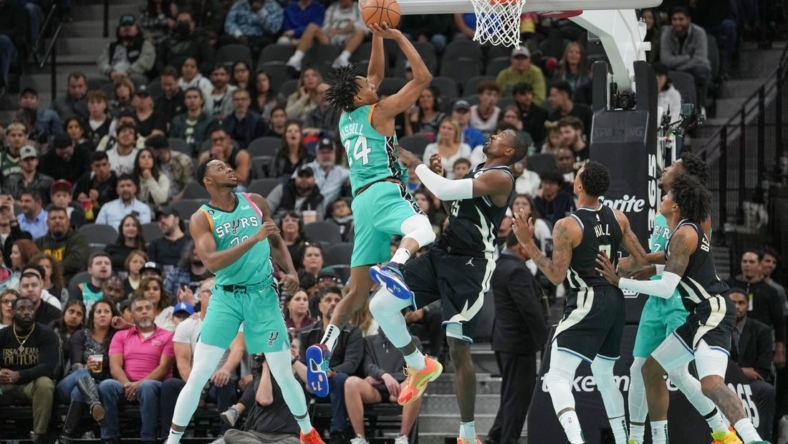 vKeldon Johnson poured in 29 points as the host San Antonio Spurs used a torrid early-fourth quarter run to put a stamp on a 111-93 win over the short-handed Milwaukee Bucks on Friday to snap a five-game losing streak.

The Spurs led by seven points heading into the final quarter and put the game out of reach via a 16-5 run to push their lead to 99-81. Johnson had seven points and Devin Vassell hit for five in that decisive stretch.

Jevon Carter led the Bucks with 21 points. Brook Lopez added 19, Bobby Portis amassed 16 points and 12 rebounds and Serge Ibaka hit for 11 points. Milwaukee has dropped two of its past three games after starting the season 9-0.

The first quarter went back and forth, with seven ties and four lead changes, the last of which came on a Vassell pullup jumper with 1 minute to play in the period that gave the Spurs a two-point advantage on the way to a 31-27 lead at the end of the quarter.

San Antonio began to pull away in the second quarter, as eight points by Johnson over a nearly two-minute stretch in the middle of the period helping turn a four-point lead to a 50-39 advantage at the 6:12 mark.

The Bucks fought back to within six points on Carter’s free throw with 1:17 left before McDermott’s running layup 17 seconds later granted San Antonio a 54-46 advantage at the break.

Johnson scored 12 points in the half to lead all players while Carter’s 10 points paced Milwaukee.

The Spurs pushed their lead to 21 after a McDermott 3-pointer with 5:58 to play in the third quarter. But Milwaukee refused to fold its tent, reeling off 15 of the following 17 points to draw back to within 77-69 after a Lopez free throw at the 2:42 mark. The Bucks were within 83-76 heading to the fourth quarter.