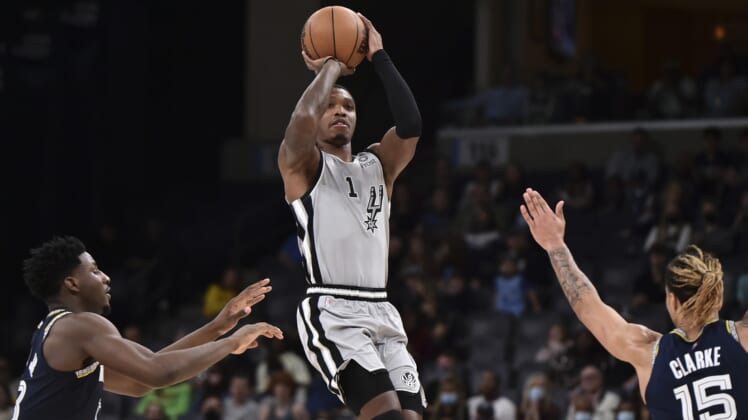 The Detroit Pistons already owned the league’s worst record before they got hit with a wave of COVID-19 positives. What’s happened to them over the past week seems almost cruel.

They’ve had eight players enter the league’s protocols and with two other key players, Jerami Grant and Kelly Olynyk, sidelined by long-term ailments, they’ve been forced to rely on replacement players to avoid postponements.

They’ll host San Antonio on New Year’s Day with many players still out of action.

Detroit, which has lost 18 of its last 19 games, had just four players on its usual 15-man roster available to play in the past two games. All other players that coach Dwane Casey used in Wednesday’s 94-85 loss to New York were on 10-day contracts.

To make matters worse, one of those regulars, Frank Jackson, suffered an ankle injury that will sideline him for at least 10 days. Detroit added another player on a 10-day contract Friday.

Saddiq Bey and Hamidou Diallo have done their best to carry the lead. Bey scored a career-high 32 points against Knicks.

Diallo, who struggled to get into the rotation prior to team’s COVID issues, had 31 points after a 28-point outing at San Antonio on Sunday.

“Those two guys did what they could do to carry us,” Casey said.

Diallo said opportunity has been the key to his production.

“Playing in small minutes is hard for anyone to showcase your talents,” he said. “But you’ve got to take what you receive. I was doubted my whole life. I wasn’t supposed to be here. I take what I get and on any given night just go out and try to make the best of it. Just keep grinding.”

Casey was pleased that Diallo contributed 13 rebounds, four assists and four steals to go along with his scoring outburst.

“He hasn’t forgotten his day job,” Casey said. “That’s the good thing about Hami. He gets after it defensively. He rebounds. The area of growth for him is understanding situations, his passing and those types of things when he does have the ball.”

The Spurs overwhelmed the depleted Pistons a week ago 144-109. They shot 56 percent from the field and got at least one field goal from every available player, led by Keldon Johnson’s 27 points.

San Antonio will be playing the second game of a back-to-back. They were defeated 118-105 by Memphis on Friday.

Jakob Poeltl, Bryn Forbes and Derrick White each had 15 points to lead the Spurs. White added nine assists, and Tre Jones finished with 13 points. Keita Bates-Diop had a career-high 11 rebounds.

Rookie first-rounder Joshua Primo played just nine minutes, but he made a good impression when he faced the Pistons last weekend. He contributed nine points, five rebounds and two assists in 15 minutes.

“We got some great rookies,” guard Derrick White said. “Primo is 19, but he’s pretty professional for 19. And Joe (Wieskamp) comes in and does what he needs to do. It’s good to have them.”