Spurs close in on play-in berth with win over Nuggets 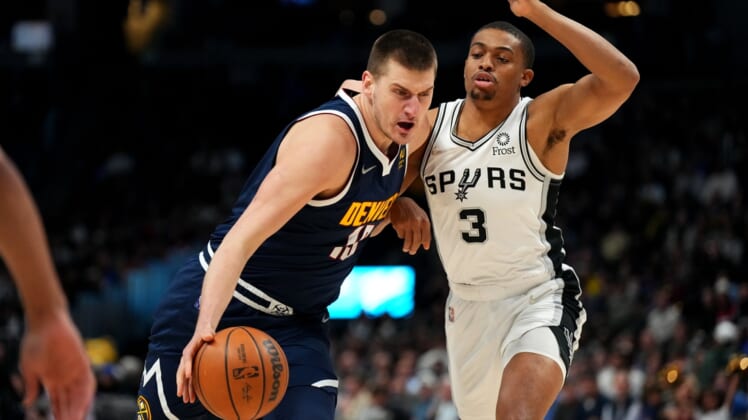 Tre Jones had 14 points and 10 assists, Jakob Poeltl also scored 14 points and Zach Collins added 13 for the Spurs (34-45), who have won five straight road games. San Antonio moved closer to securing 10th place in the Western Conference and the last spot in the play-in bracket.

Nikola Jokic had 41 points and 17 rebounds and Aaron Gordon added 18 points and 13 rebounds for Denver (47-33). The Nuggets missed a chance to clinch a playoff spot and need one win or a Minnesota loss to secure at least the sixth seed and avoid the West’s play-in tourney.

Another run at the end of the second gave the Spurs a 21-point lead, and they took a 64-44 lead into halftime.

Denver opened the second half on an 8-2 run to get within 66-52, but Johnson’s 3-pointer made it 71-54. Jokic made a technical foul free throw and an 18-foot jumper, Gordon grabbed an offensive rebound and banked it in and Austin Rivers scored on a driving layup to pull within 71-61 with 6:25 left in the third.

Johnson scored San Antonio’s next six points and Lonnie Walker IV’s 3-pointer gave the Spurs an 80-67, lead but Will Barton hit back-to-back 3-pointers to spark a run that cut the deficit to 85-79 heading into the fourth.

The Nuggets got within 87-83 early in the fourth, but San Antonio answered. Vassell and Richardson made 3-pointers around a layup by Jones, and Collins converted a three-point play to make it 98-85 with 8:13 left.

Denver had two empty possessions and Richardson made a corner 3-pointer to cap a 14-2 run and give the Spurs a 101-85 lead. The Nuggets never got closer than 13 the rest of the way.