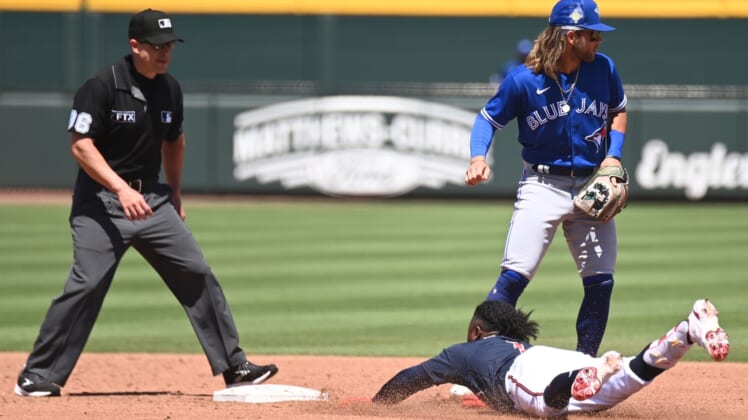 Matt Kroon also went deep for the Phillies, who out-hit the Orioles 11-2. Philadelphia starter Cristopher Sanchez threw three shutout innings, and Dillon Maples struck out the side in the ninth.

Ronald Guzman went 3-for-4 with a double and five RBIs as New York routed Detroit at Lakeland, Fla. Victor Reyes socked a three-run homer to lead the Tigers’ offense.

Andrew Benintendi homered in each of the first two innings and Edward Olivares added a grand slam as Kansas City crushed Cleveland at Surprise, Ariz. The Royals’ Carlos Santana and Salvador Perez each had three of the team’s 19 hits.

Noah Syndergaard yielded just one hit and one run, which was unearned, in 3 2/3 innings as Los Angeles defeated Oakland in Tempe, Ariz. Matt Duffy went 3-for-3 for the Angels.

Mitch Haniger had an RBI single and a run-scoring double to lead Seattle past Texas in Peoria, Ariz. Joe McCarthy, Brad Miller and Yohel Pozo homered for the Rangers.

Corbin Burnes struck out eight while allowing one run and one hit in five innings as Milwaukee beat San Francisco in Phoenix. Willy Adames and Rowdy Tellez each hit a two-run homer for the Brewers.