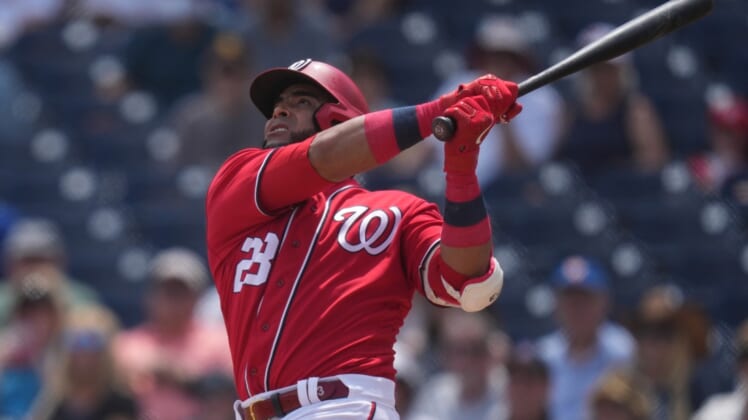 The Nationals slugged three of their homers in an eight-run second inning, including Cruz’s slam. Keibert Ruiz went 2-for-3 with a homer and three RBIs. The Nats pounded out 20 hits.

Fedde struck out five and gave up just two hits.

Taijuan Walker got roughed up for six runs on six hits in 1 1/3 innings for the Mets.

Steven Matz gave up no runs on two hits with five strikeouts in 6 2/3 innings as St. Louis blanked host Miami in Jupiter, Fla. Darlin Moquete went 2-for-3 with two RBIs for the Cardinals.

Kyle Schwarber and J.T. Realmuto drove in two runs apiece as host Philadelphia beat Pittsburgh to improve to 8-1 in Clearwater, Fla. Realmuto is hitting .371 on the spring. Zach Eflin earned the win, giving up one run on four hits with seven strikeouts in 3 2/3 innings.

Seven Atlanta pitchers held visiting Tampa Bay to just one hit and Matt Olson delivered the game’s only run with a two-out double in North Port, Fla. Olson and Ozzie Albies had two hits apiece for the Braves.

Ten different batters had one hit each as Boston used a seven-run sixth inning to topple visiting Minnesota in Fort Myers, Fla., home to both teams. Abraham Liendo drove in three runs and Ronald Rosario two for the BoSox. The Twins got home runs from Byron Buxton and newcomers Carlos Correa and Gio Urshela.

Bo Bichette drove in the winning run on an infield hit in the fifth inning for host Toronto to top Baltimore in Dunedin, Fla. Toronto’s Alek Manoah gave up an unearned run in 4 2/3 innings for the no-decision. The Orioles scored their only run on a throwing error by Bichette.