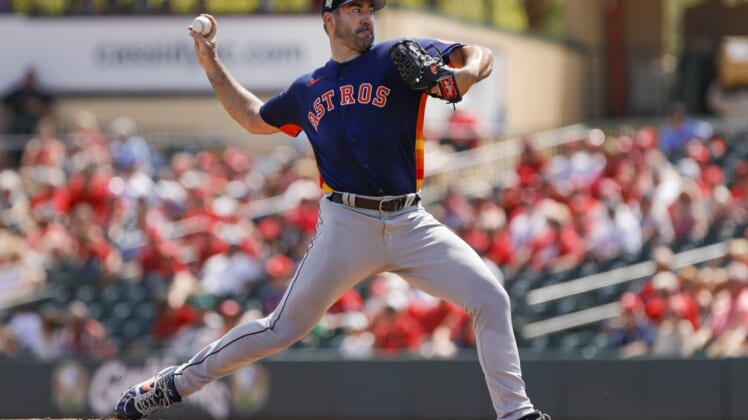 Justin Verlander, back on a major league mound for the first time in two years, threw two scoreless, hitless innings for the Houston Astros on Friday in a 4-2 loss to the St. Louis Cardinals at Sarasota, Fla.

Verlander struck out two and walked one as he begins his return from Tommy John surgery.

Nolan Arenado hit a two-run single and Andrew Knizner added a two-run homer for the Cardinals.

Cole Tucker and Greg Allen homered for Pittsburgh in a victory over New York at Bradenton, Fla. Rodolfo Duran hit a solo shot for the Yankees.

Gabriel Arias’ seventh-inning single broke a tie and lifted Cleveland past Cincinnati at Goodyear, Ariz., allowing the Guardians to prevail in their first game with their new nickname. The Reds’ Nick Senzel hit a two-run double.

Christian Bethancourt hit a pair of RBI singles as Oakland outslugged Los Angeles at Mesa, Ariz. The Angels’ Jo Adell had a two-run homer and a run-scoring single.

Corey Seager socked a three-run homer in his Texas debut as the Rangers played to a tie against Kansas City in Surprise, Ariz. The Rangers’ Nathaniel Lowe also homered, while Adalberto Mondesi and Nick Pratto went deep for the Royals.

Andy Burns’ solo homer in the bottom of the ninth lifted Los Angeles to a tie with Milwaukee in Phoenix. Jason Martin’s solo blast in the sixth inning had given the Brewers a 3-2 lead.

Marcus Stroman and Mark Leiter Jr. each fired two no-hit innings as Chicago beat San Francisco at Scottsdale, Ariz. A four-run third inning was all the offense the Cubs needed.