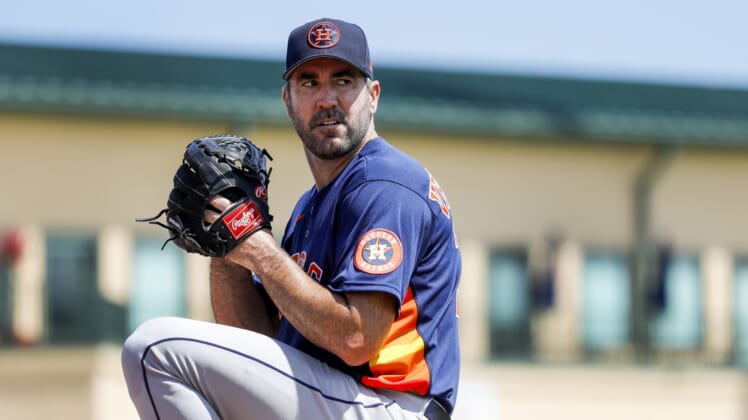 Verlander (2-0) has yet to give up a run in three spring starts. Coming back from Tommy John surgery, Verlander is sporting a 0.00 ERA in 8 2/3 innings. He’s given up just five hits and struck out 10.

Jeremy Pina delivered a two-run single in the second inning to put the Astros up to stay.

Tanner Rainey gave up two runs on two hits and took the loss for the Nats.

Yandy Diaz drove in two runs on two hits — including the go-ahead run in the fifth inning — to give Tampa Bay the win over visiting Minnesota in Port Charlotte, Fla. Carlos Correa hit his first home run for Minnesota, a solo shot in the fourth inning.

Marwin Gonzalez went 3-for-3 and belted his third home run of the spring as New York pounded out 14 hits in the win over visiting Philadelphia in Tampa, Fla. Max Burt added a grand slam for New York. Philadelphia starter Aaron Nola (0-1) got roughed up for four runs on five hits in four innings.

Ildemaro Vargas clubbed a home run in the third inning that proved to the game-winner as Chicago edged visiting Arizona in Mesa, Ariz. The Diamondbacks racked up nine hits but stranded 10 as former Cub Zach Davies (0-1) took the loss. Chicago’s only other hit was a two-run homer by Willson Contreras.

Four players had at least two RBIs as San Francisco held off visiting San Diego on Scottsdale, Ariz. It was the Giants’ first home win of the spring. Michael Gigliotti’s home run in the sixth inning gave San Francisco an 11-0 lead. Carlos Rodon (1-0) gave up no runs on one hit in four innings to earn the win.

Leadoff hitter Shohei Ohtani went 1-for-2 with two RBIs and two runs scored, and Justin Upton belted a three-run home run to power Anaheim past host Colorado in Scottsdale, Ariz. Jose Suarez (1-0) gave up a run on four hits while striking out four to get the win.

Kyle Isbel hit a three-run home run in a pivotal fourth inning to give Kansas City the rout over host Seattle in Peoria, Ariz. Both teams finished with 12 hits. Logan Gilbert (0-1) got roughed up for five runs on five hits and a walk in 3 2/3 innings for Seattle.