Spring training roundup: Colorado Rockies’ power too much for Diamondbacks 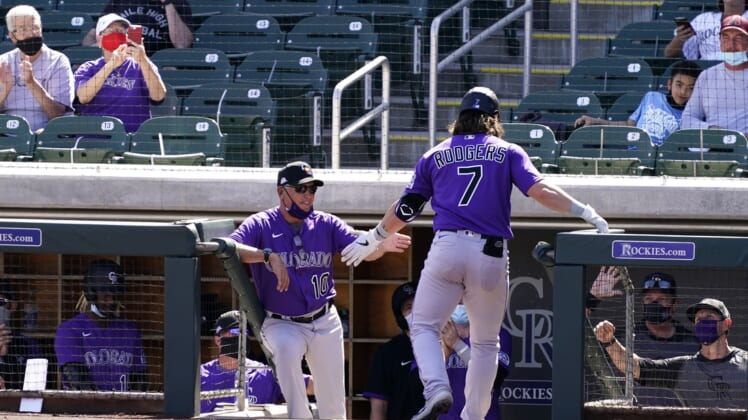 Second baseman Brendan Rodgers, the No. 3 overall pick in the 2015 draft by Colorado, hit a long homer in the second and doubled in the fourth in his attempt to win a starting spot.

Steven Brault led a parade of quality Pittsburgh pitching that carried a no-hitter to the ninth inning and Ke’Bryan Hayes had two hits and scored twice in the Pirates’ win over Atlanta at North Port, Fla. The Braves’ Phillip Ervin’s single broke up the no-hitter and Ryan Goins later scored on a balk.

Daniel Johnson hit a pair of solo homers and Logan Allen struck out six in three innings as Cleveland rolled over Texas at Goodyear, Ariz. Joey Gallo homered for the Rangers.

Rafael Ortega connected on a game-winning grand slam off Nik Turley as Chicago rallied past Oakland at Mesa, Ariz. Matt Chapman hit his second homer of spring training for the A’s.

Blake Snell allowed one hit in two scoreless innings and Wil Myers hit a home run as San Diego took down Chicago at Glendale, Ariz. Lance Lynn struck out five in 2 2/3 innings for the White Sox.

First-inning homers by Dylan Moore and Ty France off Danny Duffy, followed by a triple from Kyle Lewis got Seattle rolling en route to a victory over Kansas City at Peoria, Ariz. Jorge Soler homered for the Royals.

Christian Yelich and Orlando Arcia combined for four of Milwaukee’s 17 hits in a rout of San Francisco at Maryvale, Ariz. Alex Dickerson had two hits and Steven Duggar hit a homer and drove in two runs for the Giants.